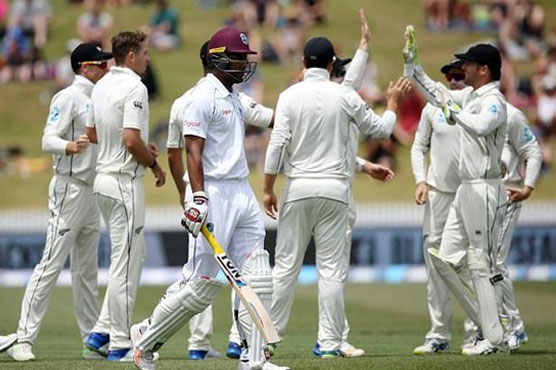 They shared a 61-run last wicket stand to get New Zealand up to 373 in their first innings.

HAMILTON, New Zealand (AFP) - New Zealand enjoyed a "fun" day out as Tim Southee and Trent Boult ensured they seized command on a rain-affected day two of the second Test against the West Indies in Hamilton on Sunday.

Southee and Boult starred with bat and ball as the West Indies were left struggling 158 runs behind on the first innings with only two wickets remaining.

The tail-end batsmen boosted New Zealand to 373 in their first innings with a 61-run last wicket stand.

The new ball pair then bagged four wickets between them on a benign pitch as the West Indies plummeted to 215 for eight at stumps.

"Obviously in a first innings where we want to go big and get as many on the board as we can so a combination of runs and keeping their bowlers out there and their fielders and batsmen was pretty important.

"Believe it or not I take a lot of pride in my batting. Any contribution, not just myself but the lower order, is very pivotal."

But to see the West Indies run chase fall apart after they were off the field for 90 minutes because of rain came as a surprise.

"There wasn’t much swing, in terms of the wicket it was a bit slow ... I’ll tell you for free they’re not too happy losing eight wickets," Boult said.

Raymon Reifer, 22 not out at stumps in his debut Test innings, accepted it was a good batting strip and "a few of the guys will be disappointed".

"Today didn’t go the way we wanted it to go but we’re still going to fight to try and get in a good position."

New Zealand added 87 runs at the start of the day, the bulk of them in the Boult-Southee partnership with the innings ending on Southee’s dismissal.

But 10 minutes later he was bowling the first over of the West Indies’ reply and took the wicket of Kieran Powell without scoring.

He also had Shai Hope for 15 and pulled off a stunning catch to remove Kraigg Braithwaite, the West Indies’ top scorer with 66.

The 1.93-metre (6ft 4in) Southee leapt to get a hand to block an edge off Colin de Grandhomme, and then dived to get a hand under the ball just as it was about to hit the ground.

Boult took the wickets of Shimron Hetmyer for 28 and the luckless Sunil Ambris for two.

Play was interrupted for nearly 90 minutes by rain when the West Indies were 87 for two with Brathwaite and Hope laying the foundations for a solid partnership.

But when play resumed, 20 minutes after the scheduled tea break, Hope only lasted six more balls before he was gone to end a 44-run stand and put the tourists into a tailspin that saw six wickets fall in the final session.