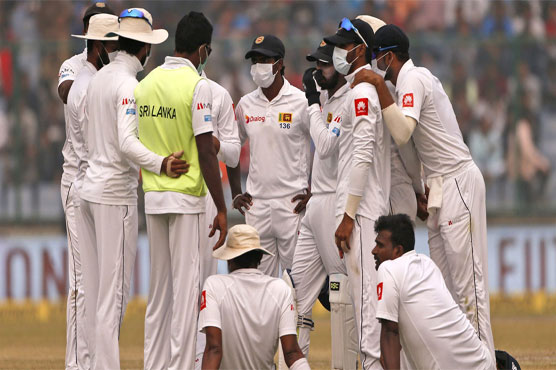 The BCCI said after this week's debacle at the Feroz Shah Kotla stadium that the Indian capital could be dropped as a venue during winter, when pollution levels tend to spike. Photo: AP

(AFP) - Cricket organisers must take pollution into account before allowing matches to go ahead, the Indian Medical Association told the country’s governing body for the sport Thursday, after a smog-plagued Test match in New Delhi.

The IMA said in a letter to the Indian cricket board it was "greatly troubled" by scenes of players wearing masks to protect themselves from air pollution many times the global safe limit during the third test match between India and Sri Lanka in New Delhi.

Two players vomited on the pitch, and play had to be halted briefly.

"Exposure to air pollution increases the risk of lung and heart disease and may precipitate an acute potentially life-threatening event," it said in a letter to the Board of Control for Cricket in India (BCCI) seen by AFP.

"When pollution levels are this high, everyone including healthy persons may experience some level of discomfort," said the letter, signed by IMA president K.K. Aggarwal.

Pollution should be taken into account before allowing play to proceed in much the same way as for rain and poor light, he added.

The BCCI said after this week’s debacle at the Feroz Shah Kotla stadium that the Indian capital could be dropped as a venue during winter, when pollution levels tend to spike.

"The BCCI has been sensitive on the smog and fog matter over the years," the board secretary Amitabh Choudhary said.

Copies of the IMA’s letter were also sent to India’s chief justice and the International Cricket Council (ICC), which would have to approve any such changes.

Sri Lanka have made no official complaint but their coach Nic Pothas said earlier it wasn’t normal for players to suffer in that way.

"I think it’s the first time that everybody has come across that situation," he said after the first smoggy day’s play.

"There aren’t too many rules regarding pollution."