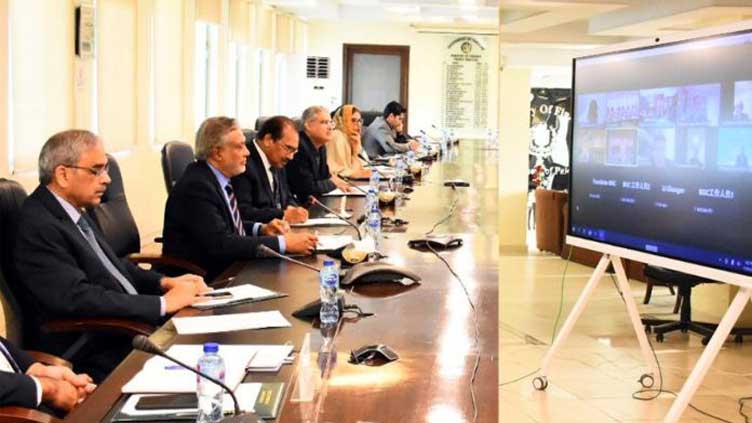 ISLAMABAD (Dunya News) - Minister for Finance Ishaq Dar Tuesday sought the support of Bank of China and asked the Bank’s President for expansion of business relations with Pakistan to deepen the economic and financial relations.

In a virtual meeting with President Bank of China Liu Jin, the minister shared that it has always been great pleasure to work with Bank of China and Pakistan has enjoyed sound financial dealings with the bank.

The Finance Minister also highlighted the recent visit of Prime Minister of Pakistan to China and talked about reciprocation of warm sentiments from Chinese leadership.

SAPM on Finance Tariq Bajwa, SAPM on Revenue, Tariq Mehmood Pasha, Special Secretary for Finance, and other senior officers from the Finance Division attended the meeting.

The Finance Minister, while talking about the long standing and durable relationships between the governments of China and Pakistan, expressed gratitude to the President, Bank of China for their continuous support of Pakistan in testing times.

The President of the People’s Bank of China also highlighted the historical and bilateral ties between both countries and appreciated the Government of Pakistan for taking the necessary measures to ease the lives of the masses in the country. He also acknowledged the contribution of Pakistan in supporting China during hard times.

He also commended the ongoing facilitation being provided by the government of Pakistan on various Chinese projects under the umbrella of the China Pakistan Economic Corridor (CPEC).

The Finance Minister thanked the President Bank of China for continuous support and assured him of the same support by the present government in deepening the economic, trade, and investment cooperation.

In another meeting with a delegation of institutional investors here, the minister said Minister for Finance and Revenue Senator Mohammad Ishaq Dar Tuesday asserted that present government aims at successfully completing the International Monetary Fund (IMF) program and it would also repay the international bonds on time.

He further asserted that present government is committed to honouring all of the financial commitments made by the present as well previous government with national and international financial institutions.

The delegation discussed the economic situation and outlook of the country. The delegation held a comprehensive discussion with the Finance Minister regarding International Monetary Fund (IMF) program, flood related expenditures and losses, market perception and outlook, as well as external account situation.

The Finance Minister welcomed the delegation and assured it that the present government has taken all pragmatic measures to facilitate the business environment in Pakistan. He shared that Pakistan is slowly but gradually moving towards economic stability, and it is a good time to invest in Pakistan.

It was shared that reconstruction and rehabilitation phases will start in the coming months. The Finance Minister appreciated the friendly countries for their flood relief support.

While SAPM on Finance Tariq Bajwa, SAPM on Revenue Tariq Pasha attended the meeting, the Special Secretary for Finance and other senior officers from Finance Division also attended.