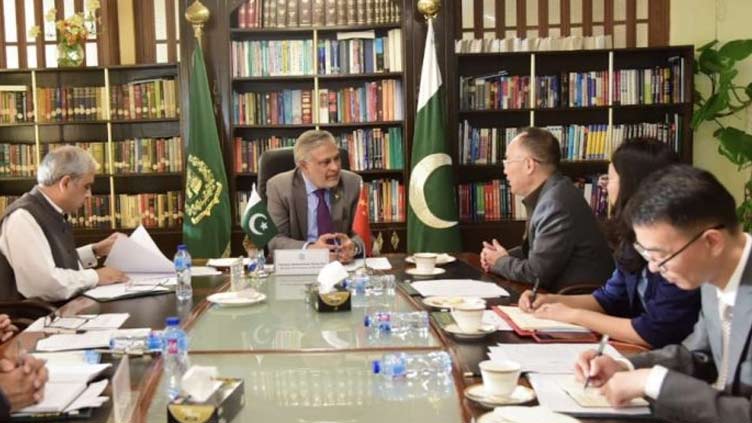 ISLAMABAD (Dunya News) – The Ambassador of the People’s Republic of China to Pakistan Nong Rong called on Federal Minister for Finance and Revenue Senator Mohammad Ishaq Dar on Friday.

Finance Minister Ishaq Dar welcomed the Chinese ambassador and highlighted about the friendly and multi-dimensional historic bilateral ties between Pakistan and China, said a press release.

The finance minister shared huge gratitude toward Government of China for providing support to Pakistan in this time of devastated floods. The latest flood losses were also discussed in the meeting.

Both sides further discussed about fast-tracking progress on CPEC and exchanged views on further enhancing brotherly relations between both the countries.

It was also shared that CPEC was a key project and its completion in timely manner was imperative for reaping the lucrative returns.

The Chinese ambassador shared historical brotherly ties between both the countries and assured the finance minister of continuous facilitation and support to Pakistan.

At the same time, the Chinese ambassador also shared thankful sentiments toward Government of Pakistan for facilitating the Chinese companies working on various projects in Pakistan.

In concluding remarks, the finance minister extended gratitude to the Chinese Ambassador Nong Rong for continuous support and cooperation being offered by the Government of China.