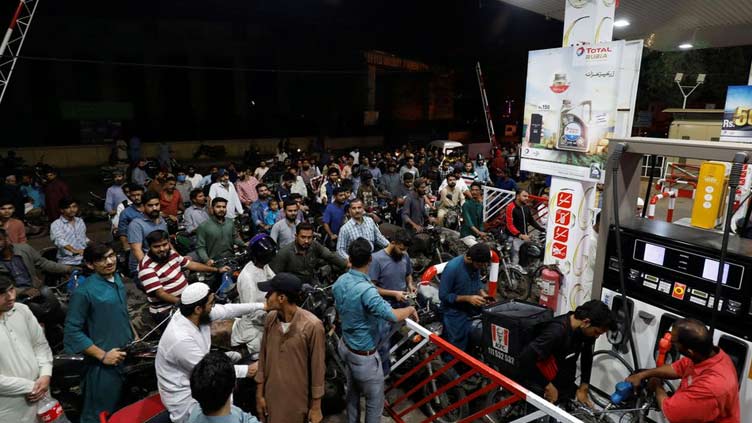 ISLAMABAD (Dunya News) – Bowing down to the pressure of the International Monetary Fund (IMF), the government is likely to increase prices of petroleum products by Rs 10 from July 1 (Friday).

Pakistan received Memorandum of Economic and Financial Policy (MEFP) from the International Monetary Fund (IMF) which would combine the seventh and eighth tranches.

According to IMF’s MEFP, economic discipline is necessary in Pakistan after which more tough decisions will have to be taken from July 1.

Sources said that talks are underway between Pakistan and the IMF on MEFP and from July 1, sales tax of 5% on petrol and a levy of Rs 10 could be imposed.

Sources further said that from July 1, electricity may also become more expensive and a tough target has to be met to reduce energy losses, while government agencies will also have to meet a strict target to reduce losses.

Earlier today, Minister for Finance Miftah Ismail while addressing a conference titled “Turnaround Pakistan” had said that the government would receive from the IMF $ 900 million as the seventh tranche and $1 billion as the eighth tranche.

The Minister said that Prime Minister Shebaz Sharif’s dream was to take Pakistan towards self reliance, sustainable and inclusive growth. “This goal is not difficult.

The government has examples of China, Japan and South Korea, which have grown by 10% annually.

He said: “We intend to provide relief to 6 million people, of which 4 million are already registered. The Prime Minister has provided a scheme for cheap petrol and food which will benefit 6 million people,” he said adding that the government had made difficult decisions to strengthen Pakistan’s economy.

“When we left the government, country’s debt servicing stood at Rs 1,500 billion per year, which currently stands at Rs 4,000 billion and now our debt has doubled. Now Pakistan can’t afford any more deficits,” he said while explaining anomalies involving tax to GDP ratio which is one of the lowest in the world.

He said that the government made petrol more expensive and the poor people understood the situation and sided with us. Similarly, “we imposed tax on rich people and also imposed super tax on 10 percent of industries.

The government is also bringing shopkeepers all over Pakistan into the tax net,” the Minister said adding that economic growth in Pakistan required strong fiscal discipline and economic management.