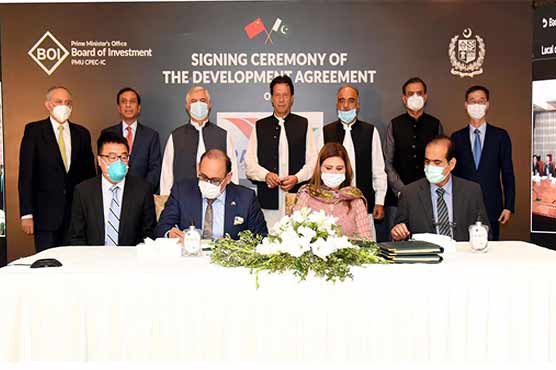 Rashakai SEZ will provide conducive business environment for bringing FDI in the country.

Addressing the ceremony on Monday, Prime Minister Imran Khan said that the development of Rashakai Special Economic Zone will help boost industrialization and create job opportunities in the country.

He termed the initiative as a golden opportunity for industrial development of the country.

The prime minister said the completion of this economic zone will promote ease of doing business in the country and facilitate the local and foreign investors.

Highlighting the strategic significance of Rashakai Special Economic Zone, he said the development of this zone and peace in Afghanistan will help develop connectivity to Central Asia that can change the destiny of the region.

PM Khan went on to say that Uzbek leadership has shown interest in developing rail track from Mazar Shareef Afghanistan to Peshawar and it can trigger a revolution for industrial growth in the country.

"The mega ML-1 project will also help promote local businesses as it will reduce the traveling time between Karachi and Lahore to just eight hours," he added.

Earlier, the Minister of State/Chairman Board of Investment (BOI), Atif R. Bokhari, in a statement had said that signing of the Development Agreement of Rashakai , SEZ under CPEC would realize the vision of special economic zones’ development, ultimately leading to a prosperous and industrial Pakistan.

He highlighted the progress on SEZs under CPEC, saying that sufficient headway has been made on this front and the zones are now becoming ready for business.

He said that Pakistan’s proximity with China will allow these SEZs to foster economic interdependence for mutual economic advantage.

He said the Special Economic Zones Act 2012, under Section-13 binds together the Federation (Board of Investment), the Province and the SEZ Developer through an agreement for the successful establishment and development of an SEZ, aptly termed as the Development Agreement.

The chairman BOI said that this agreement provides the road map for establishment of an SEZ while holding the Federal and provincial government and the developer jointly responsible for the development and successful operations of an SEZ.

The Rashakai SEZ is to be developed under Public Private Partnership mode, by Khyber Pakhtunkhwa Economic Zone Development and Management Company (KPEZDMC) (a Section-42 company of Government of Khyber Pakhtunkhwa) in collaboration with China Road & Bridge Corporation (a state-owned Chinese enterprise),he said.

Atif said that an SPV Company of these two firms named Rashakai Special Economic Zone Development and Operations Company (RSEZDOC) has been created for implementation of this Agreement, which is first of its kind with Chinese counterpart being one of the parties.

A project of USD 128 Million, spanning over 1,000 acres of land was awarded SEZ status on August 6, 2019 and its Concession Agreement was signed in April 2019,he added.

He said the Board of Investment promoted establishment of this SEZ with the goals of capitalizing on investment inflow under CPEC, inclusive economic development of KP Province, creation of job opportunities, industrial development, and export generation in Pakistan.

Rashakai SEZ holds a unique competitive advantage due to its proximity to the first juncture of CPEC route, and significant resource and manufacturing base in the region, he said.

Due to such factors, it has the potential to become one of the primary investment destinations for foreign investors – particularly Chinese Investors who are looking to find new and cheaper markets to relocate their industrial base.

The Chairman BOI, Atif R. Bokhari said that Board of Investment has successfully expedited the process of provision of promised utilities, facilitated allocation of fiscal incentives and concession to the co-developer of the SEZ.

To enable successful operations of this SEZ, federal government has committed 1.8 bn PKR for provision of 210 MWs of electricity, and 1.2 bn PKR for the provision of 30 mmcfd gas from the Federal PSDP. Provision of required utilities at the doorstep of the SEZ as per the required timelines of the project will allow for on-time construction and development of the SEZ, he added.