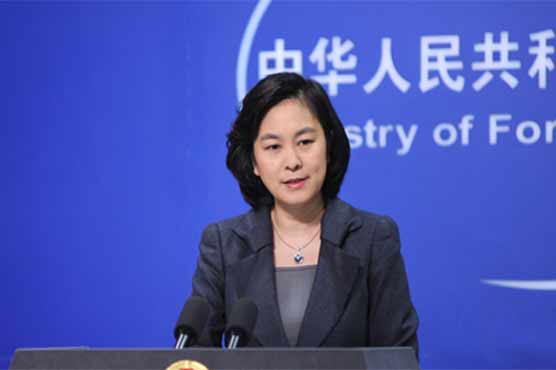 She said China supports the extension of China-Pakistan Economic Corridor (CPEC) to Afghanistan.

BEIJING (Dunya News) – China has applauded resumption of trade relations between Pakistan and Afghanistan after both the countries overcame impact of COVID-19 pandemic.

Addressing a media briefing in Beijing, Chinese Foreign Ministry’s Spokesperson Hua Chunying said China wants to see better relations between the two sides and economic growth of Islamabad and Kabul. She said we will like to play a constructive role in this regard.

Pakistan has opened five key routes with Afghanistan for bilateral and transit trade over the past weeks to help war-ravaged Afghanistan boost trade.

Pakistan had closed all trade routes with Afghanistan in March due to the Covid-19 outbreak, but has now reopened Torkham in northwest Khyber Pakhtunkhwa province and Chaman in southwest Balochistan province, two major crossings with Afghanistan, for both the bilateral trade and the Afghan transit trade.

These border crossings are now operationalized for 24 hours a day and six days a week to facilitate cross-border trade, which has been affected due to the Covid-19 pandemic in both countries.

Hua remarked that as neighbour and friend to both two countries, off course China wants to see better relations between the two and economic growth of the two, adding, “We will like to play a constructive role in this regard”.

China, she said, supports the extension of China-Pakistan Economic Corridor (CPEC) to Afghanistan so that the Afghan people can benefit from the Belt and Road Initiative (BRI).

We are pleased to see Gwadar port and other CPEC projects playing a positive role in this and we will like to work with both Pakistan and Afghanistan to this end,she added.

According to experts, Pakistan’s decision to open routes for Afghan trade is positive step and the China-Pakistan Economic Corridor (CPEC) under the China-proposed Belt and Road Initiative (BRI) can greatly enhance regional connectivity and link Pakistan with Central Asia via Afghanistan.

Pakistan and landlocked Afghanistan had signed a transit trade agreement in 1965 that was revised in 2010, which calls for better facilitation in the movement of goods between the two countries.”

Encouraged by the favorable policy, a cargo ship, carrying about 16,000 tonnes of urea for transit to Afghanistan arrived at the Gwadar port in May.