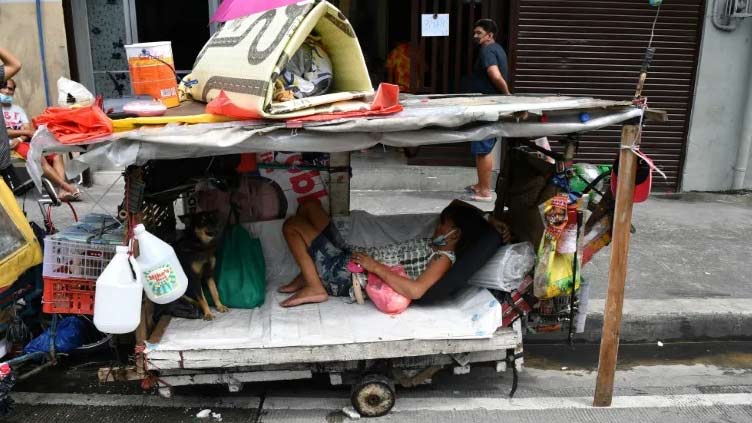 (AFP) – Like thousands of homeless people in the Philippine capital Manila, Maricel Abawag and her son used to sleep on flattened cardboard boxes laid out on footpaths. Then they got a pushcart.

Pushcarts, known as karitons, are a common sight in the city of more than 13 million people.

Often made from scraps of wood, the human-powered carts are used as shelter, storage and a source of income, such as collecting trash to sell to recyclers.

Abawag, 44, received her pushcart in November 2020 from a Catholic brother.

About a year earlier Abawag had "lost everything" when her partner was jailed for beating her. He died of a heart attack in custody.

She began sleeping on the streets while still breastfeeding her baby.

"If I were to look for a house we would need to pay rent," Abawag told AFP.

"Then we would need to pay for electricity, water, rice and milk -- I don t have enough money."

Nearly 50 percent of Filipino families consider themselves poor, according to the latest survey by research organisation Social Weather Stations.

Many live in overcrowded slums or on the streets.

Ed Billones, who donated the pushcart to Abawag, said people without homes were often viewed as "lazy and addicts".

In reality, many have come from the provinces in search of work that did not materialise or were forced from their homes by domestic abuse or the loss of the family breadwinner.

He has lost count of the number of pushcarts that have been confiscated by local officials during street-clearing operations.

"If I don t have one, I m unable to earn," said Torres, who collects plastic bottles and cardboard.

Every night, Abawag and her now four-year-old son sleep inside their pushcart parked under a tree on the footpath of a busy street.

The cart is 1.6 metres (5.2 feet) long and 31 centimetres (about one foot) wide and contains all their worldly goods like a torch, radio, soap, pillows, blankets and toys.

When it rains, Abawag pulls a clear plastic sheet over the top to keep them dry.

Metres away, people eat at restaurants that Abawag will likely never be able to afford.

After losing a precious bag of clothes to a thief, Abawag now locks the pushcart and secures it to the tree before she sets out on foot every day to sell rags.

"If I sell enough rags, I buy food. If I don t have any sales then I wait for people to give us food," she said.

Abawag said she was embarrased when she began living on the streets. But her religious faith helped her adjust.

"I m not afraid to live on the street because I pray to God to not abandon us," she said.