Half of Kyiv still without electricity after Russian strikes 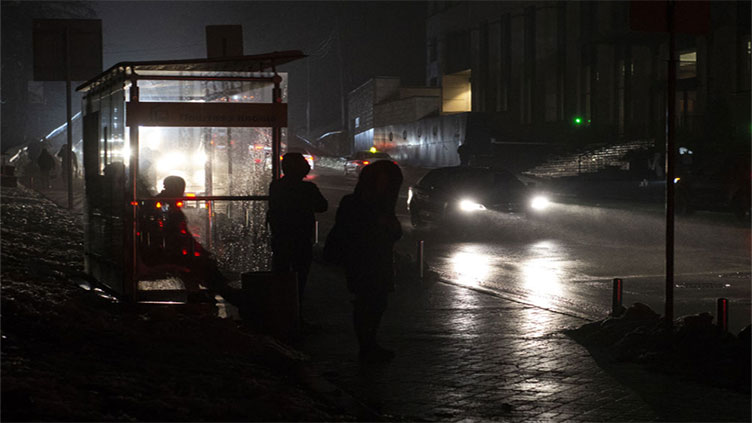 Half of Kyiv still without electricity after Russian strikes

Nearly half of Kyiv residents were still without electricity Friday two days after Russian strikes.

KYIV (AFP) - Nearly half of Kyiv residents were still without electricity on Friday as engineers battled to restore services two days after Russian strikes hammered the country s energy grid.

After nine months of war, Russian President Vladimir Putin met for the first time with women whose children are fighting in Ukraine, assuring those who had lost sons that he and Russia s elite "share this pain".

And in the southern region of Kherson, the governor there said Russian shelling had forced the evacuation of patients from hospitals in the city of Kherson.

The systematic and targeted Russian attacks over recent weeks have brought Ukraine s energy infrastructure to its knees as winter approaches, spurring fears of a health crisis and a further exodus.

"We have to endure this winter -- a winter that everyone will remember," Ukraine President Volodymyr Zelensky said on social media.

"Almost all Ukraine s critical infrastructure has been reconnected," he said.

Cars queued outside petrol stations in Kyiv on Friday to stock up, AFP journalists said. Mobile networks in some areas were still experiencing disruption.

Millions of Ukrainians have endured the cold without power since Russia fired dozens of missiles and launched drone attacks at water and electricity facilities on Wednesday.

"Yes, this is a difficult situation and yes, it can happen again," presidential advisor Mykhailo Podolyak said on television.

"But Ukraine can cope."

With gas for cooking and heating disconnected in her Kyiv apartment, Albina Bilogub told AFP that she and her children all slept in the same room to stay warm.

"In our building, very few people have gas, so we go to the woman that I work for -- I change her clothes because she is disabled -- and we cook there," she said.

"This is our life. One sweater, a second, a third. We live like this now."

In northern Kyiv, a vet in blue scrubs and a face mask shone a light over an operating table in a darkened clinic as colleagues operated on an ailing dog late Thursday.

"We were in the middle of an operation and our lights turned off because a rocket fell not far away, so there was a power cut," said Oleksiy Yankovenko.

"I had to finish the operation under the flashlights," he added.

Putin meanwhile met the mothers of soldiers fighting in Ukraine at his residence near Moscow.

"I want you to know: I personally and the entire leadership of the country share this pain," he told them.

He warned them that a lot of news reports about the conflict could not be trusted, describing them as "fake news, deceit and lies".

But Russia would achieve its goals in Ukraine, he added.

On Friday, the region s governor said hospital patients in the city of Kherson had been evacuated to nearby regions because of "constant Russian shelling". Patients at a psychiatric facility in the region also had to be evacuated.

Ukraine s Western allies have denounced the Russian attacks on energy as a "war crime", coming in the wake of a string of military setbacks for Russia on the frontlines.

Moscow insists it targets only military linked infrastructure and has blamed Kyiv for the blackouts, saying Ukraine can end the suffering by agreeing to Russian demands.

Britain s foreign minister announced new aid for Ukraine during his visit to Kyiv, including ambulances and support for victims of sexual violence by Russian soldiers.

"As winter sets in, Russia is continuing to try and break Ukrainian resolve through its brutal attacks on civilians, hospitals and energy infrastructure," Cleverly said.

"Russia will fail," he said, vowing UK support "will continue for as long as it takes".

Although they have captured swathes of territory in the south and east and the Kremlin claimed to annex four regions, Ukrainian troops are clawing back territory.