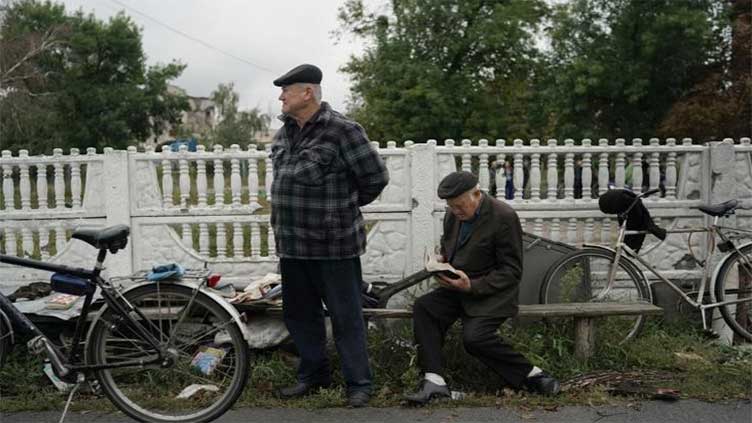 UNITED NATIONS (AP) — One after another, the world’s presidents and prime ministers came to warn of their countries’ trials and tout their triumphs. But one of the biggest issues in either column was mostly left out.

As war, climate change and inequality have consumed much of the U.N. General Assembly, leaders have largely left unsaid the historic growth of the planet’s aging population.

“Older persons are pretty much missing,” said Claudia Mahler, one of the few voices at the U.N. devoted to aging, in the Commission on Human Rights. “Everybody thinks that the future is just something for younger persons.”

Across the world, societies are seeing the promise and perils of greying lands. Public health improvements, medical advances and declines in poverty have lengthened lives, bolstered workplaces with experienced colleagues and blessed families with grandparents and great-grandparents. At the same time, caregiving and economic crises have expanded with the old outliving their resources and suffering diseases with no cure.

But as leaders stepped to the rostrum this past week and addressed the world in front of the hall’s green marble, few saw the shift worth mentioning. They spoke of “new generations,” of “children” and of “youth.” They decreed listening to young people “essential” and ensuring their educations “sacred.” The old rarely made the cut.

“Everybody is only focusing on youth,” said Mahler, whose official U.N. title is independent expert on the enjoyment of all human rights by older persons. “Older persons are not loud enough and there are not enough leaders who really focus ... Nobody wants to take up the topic even though it’s pressing.”

The population of people 60 and older has surged in recent decades, hovering around 1 billion globally. The U.N. projects it will more than double again in the next three decades. Along the way, the biggest international headlines will inevitably intersect with the oldest among us, just as they do today.

As war descends, the most vulnerable are caught in crossfire. As global economies reel, those in life’s sunset are left penniless. And as climate change forces some from their homes, the oldest are often left behind.

And then there is COVID-19, the consuming story of the past 2½ years, whose brutality on the old was unmatched and cast an international light on long-bubbling issues of inadequate care systems and social isolation.

“While older adults are enmeshed in the crucial issues of our time and often face disproportionate impacts, they are all too often left out,” said Lauren Dunning, director of the Center for the Future of Aging at the Milken Institute. “A focus on one generation without the consideration of other generations impedes the progress of all.”

To some, it’s understandable that other issues sucked much of the air from the assembly hall. If an island nation is threatened to be swallowed by rising seas or the lives of all are to be cut by nuclear war, then the issues posed by age may pale. But leaders who overlooked the topic still paid lip service to all sorts of pet priorities, including regulating social media (Slovakia); cryptocurrency law (Central African Republic); sub-seabed mining (Costa Rica); mangrove preservation (Suriname); snake bites (Eswatini); and weaponized artificial intelligence (Philippines).

“The global agenda is already pretty crowded right now,” said Seton Hall University Professor Martin Edwards, who is affiliated with the school’s Center for U.N. and Global Governance Studies. “So much of the discussion about youth is framed of what is our obligation to the next generation. Politically, I think it’s easy for sometimes leaders to talk about youth in a sense, and aging there might not be as ready a constituency.”

There have been exceptions at the U.N. over the past week, with some leaders making passing reference to aging.

Some boasted of gains in life expectancy, as the president of Timor-Leste did; noted their commitment to social safety nets for the old, as in the Mauritius prime minister’s address; or did both, as in the leader of Bangladesh. Others made fleeting mention of how the old were caught in their countries’ conflicts, as in speeches by the presidents of the Palestinian Authority and Ukraine. Standing apart from most others was Bolivian President Luis Arce, who devoted a section of his speech to older people, though still less than a minute of a 37-minute address.

“We are concerned about the focus on future generations without taking into account all the work older adults, older generations have done,” Arce said, urging the young to “show solidarity with those who have built our nations” and making note that there is no equivalent to the U.N.’s Convention on the Rights of the Child, passed in 1989, for those at the other end of the age spectrum.

“We are concerned that, to date, there is no universal treaty that protects older adults, and we hope that this is an opportunity to have a more in-depth reflection on this topic,” said Arce, who turns 59 on Wednesday.

There is a certain oddity to most leaders’ exclusion, as the men and women behind the oratory are largely older themselves and representing countries whose older populations are blooming.

Some dismiss aging as a “first world problem,” for the world’s richest to figure out in countries dotted across Asia, Nordic regions and the West, not African lands where life expectancies have the average person living into just their 50s. In reality, though, the issues around aging have sprung up everywhere to varying degrees.

It yielded an international action plan and, in the years after, the U.N. has adopted various principles and proclamations on older people and held a second world assembly in 2002.

What has not followed, Mahler, said, is the issue becoming a central priority in any national or world debate, or transforming leaders’ ability to talk about it in any way beyond focusing on its most negative impacts.

With a whiff of exasperation in her voice, Mahler spoke of the lack of attention to the old as she prepared deliver her own findings to the United Nations on the deprivation of liberty of older people. It will be difficult, she knows, to gain much attention from leaders, and a public, that often looks the other way from its elders.

“There’s a huge group of older persons which are left behind,” she said.