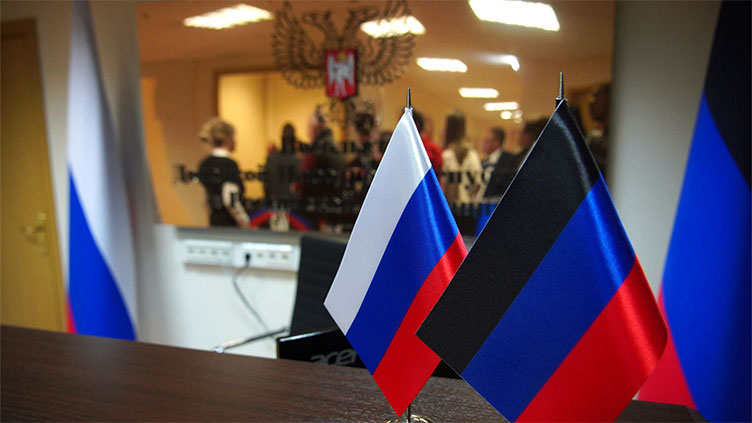 Ukraine and its allies have denounced the so-called referendums as a sham, saying the West would never recognise the results of the ballots that have dramatically ratcheted up the stakes of Russia s seven-month invasion.

In Kherson, another Moscow-occupied region in southern Ukraine, officials said more than 87.05 percent of electors supported the move after all the ballots were counted.

And officials in the Moscow-held Donetsk region claimed victory as well, with the local poll body saying 99.23 percent of the vote was for annexation.

"Saving people in the territories where this referendum is taking place... is the focus of the attention of our entire society and of the entire country," Russian President Vladimir Putin said earlier during a televised meeting with officials.

His spokesman Dmitry Peskov said the votes would have "radical" legal implications and that the so-called referendums "will also have consequences for security", referring to Moscow s threats to use nuclear weapons to defend its territory.

Ukraine s President Volodymyr Zelensky vowed Tuesday that Kyiv would defend its citizens in Moscow-held regions and rejected the referendums as a "farce."

And he said the votes mean Kyiv will not negotiate with Moscow.

"There is nothing to talk about with (the) current Russian president," Zelensky said.

Russian forces this month have suffered serious setbacks in Ukraine s east and south, which observers say pushed Putin to rush ahead with the vote to cement Moscow s authority there.

Putin said Russia would use any and all available means to defend its territory, implying that after annexation, Moscow could deploy strategic nuclear weapons to repulse Ukrainian attempts to retake the territory.

"I want to remind you -- the deaf who hear only themselves: Russia has the right to use nuclear weapons if necessary," former leader Dmitry Medvedev -- a Putin ally who is now deputy chairman of Russia s security council -- said on social media Tuesday.

Pentagon spokesman Brigadier General Patrick Ryder said the United States was taking the reiterated threat "seriously" but had seen nothing to cause Washington to change its nuclear posture.

NATO chief Jens Stoltenberg said that "Russia must know that the nuclear war cannot be won and must never be fought."

The four Russian-occupied regions of Ukraine announced that they would hold the elections just days before voting began last Friday.

Together, they form a crucial land connection for the Kremlin between Russia and the Crimean peninsula, which Moscow annexed in 2014 and is otherwise only connected to the mainland by bridge.

US Secretary of State Antony Blinken vowed that the West would never recognise Russian annexations of the territories, threatening Moscow with "additional swift and severe costs" for its "diabolical scheme".

French Foreign Minister Catherine Colonna, in Kyiv for a surprise visit to meet Zelensky, called the polls a "masquerade" that would trigger further Western sanctions.

At the United Nations, top official Rosemary DiCarlo told a meeting of the Security Council the body "remains fully committed" to Ukraine s territorial integrity "within its internationally recognised borders."

The is no chance of the Security Council -- where Russia holds a veto -- reaching a united stance on the annexation move.

Nevertheless, the United States intends to submit a resolution urging member states "not to recognize any altered status of Ukraine and obligating Russia to withdraw its troops from Ukraine," said US envoy Linda Thomas-Greenfield.

Moscow s closest major ally since the Ukraine invasion, Beijing has yet to overtly condemn the offensive, but it told the Security Council Tuesday that the "territorial integrity of all countries should be respected."

As in Crimea, the outcome was viewed by observers as a foregone conclusion. Election officials brought ballot boxes door-to-door in many cases accompanied by armed Russian forces.

Ukrainian forces meanwhile have pursued their counter-offensive in the east.

The governor of the eastern Kharkiv region announced Tuesday its forces had recaptured Kupiansk-Vuzlovyi, "one of the largest logistical and railway junctions" in the region and not privy to this week s vote.

Polling stations were open in Crimea for people who fled fighting after the Russian invasion in February.

"With my voice I want to try to make a small contribution to stopping the war," 63-year-old Galina Korsakova from Donetsk told AFP.

"I really want to go home."