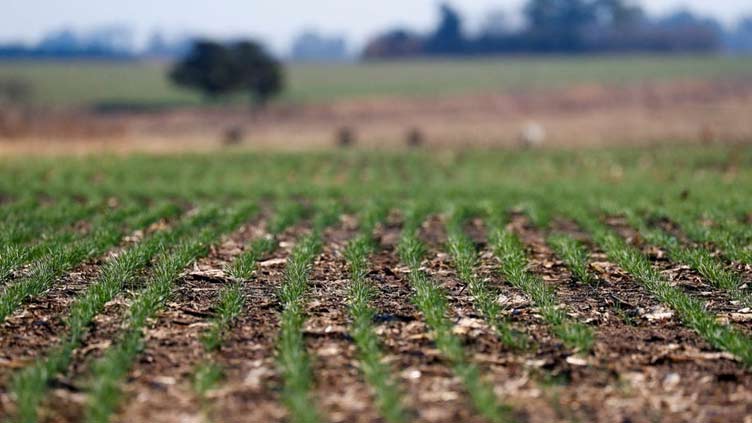 PERGAMINO (Reuters) - In fields near Argentine farm town Pergamino, spiky green shoots of wheat stretch in neat rows to the horizon, a crop developers hope will boost yields of the grain thanks to a single gene borrowed from sunflowers helping it better tolerate drought.

Reached along a dusty farm track, the field is one of dozens of sites growing a genetically modified (GM) wheat strain called HB4, developed by local firm Bioceres BIOX.O and state scientists. Argentina, the world s No. 6 wheat exporter, gave commercial planting approval to HB4 in 2020. It was the first GM wheat strain in the world to receive such approval.

Its backers say HB4, also modified to tolerate the herbicide glufosinate-ammonium, could help ward off food shortages at a time when climate change has led to severe droughts in China, North America and Europe, and a war between major growers Russia and Ukraine has snarled food supply chains.

Many environmental and consumer groups have resisted GM wheat, fearing unforeseen side-effects from changes to the genome in a grain used in bread, pasta and other staples. Genetic modifications have long been used in soy and corn, used predominantly for animal feed.

Bioceres is leading the way globally towards commercializing GM wheat, Reuters found from interviews with the firm and importers, documents on U.S. field trials obtained through a freedom of information request and a rare visit to the Argentina test fields.

The firm has gained varying levels of approvals in Brazil, Nigeria, Australia and New Zealand. It is using blockchain and georeferencing to avoid contamination with regular wheat, a risk local farmers fear could prompt import bans.

"There is some ignorance about what transgenic is, it is not a monster," said Raquel Chan, biochemist and researcher at the National Council for Scientific and Technical Research (CONICET) who led development of the strain, now licensed to Bioceres.

She explained the plant was "almost indistinguishable" from normal wheat, but that it could better tolerate a lack of water due to an extra gene edited in from the sunflower plant.

"It s something that could have happened in nature and has in fact happened in other instances... Normally it takes thousands of years. We just did it faster."

HB4 could improve crop yields 20% versus regular wheat under dry and warm conditions, according to a 2020 academic paper, published in Frontiers in Plant Science and on which Chan was a co-author.

Even with Argentina s approval, Bioceres has yet to start selling the GM wheat for commercial use in the South American country. It is also testing it in neighboring Brazil.

In the Bioceres laboratories in Argentina s inland grains port hub of Rosario, on the banks of the Parana river, Reuters saw scientists working on strains of soy, a GM crop long established in the global food supply chain.

GM wheat, however, has long been taboo. "The main concern is the possibility that GM wheat and non-GM wheat could end up mixing," said Julio Calzada, chief economic analyst at Argentina s Rosario grains exchange.

"This could spark bans in international markets and Argentina needs these $4.5 billion dollars in exports. They re key at such a complicated moment for the country s economy."

No other global seed company has publicly endeavored to develop GM wheat since 2004, when giant seed maker Monsanto, now owned by Bayer AG, dropped plans to develop GM wheat that could withstand its weed killer Roundup. Consuming countries were threatening bans of U.S. wheat, even though the company has long sold corn and soy whose genomes were changed to withstand Roundup, or glyphosate.

In 2020, Bayer agreed to pay billions of dollars to settle lawsuits by people who claimed they were harmed by its weedkiller.

BASF told Reuters it discontinued the trials in 2019 and is developing wheat through traditional breeding methods. Corteva said it does not intend to commercialize wheat from its trials. Biogemma conducted field trials only for research and development, according to owner Limagrain. Bayer said it is not working with GM wheat.

Bioceres has said it is trying to get commercial approval from the U.S. and Australian governments for planting HB4 wheat in those countries.

In Indonesia, top buyer of Argentina s wheat behind Brazil, the head of the wheat flour mills association Ratna Sari Loppies played down contamination worries, but said millers there would not yet buy Argentina s GM wheat to avoid a "negative" impact on their own exports of consumer wheat products.

Brazil, which hopes to boost its own wheat harvest and exports of the grain, appears to have softened its stance. Rubens Barbosa, president of the Brazilian flour millers association Abitrigo, said he believes Brazil might approve HB4 wheat. In 2020 he had threatened to halt wheat imports from Argentina after its government approved Bioceres  GM wheat. Brazil approved flour made from HB4 wheat in 2021.

"The seeds that will come and be planted in the north of Cerrado will have higher yields," he said in August, referring to the GM strain. "All of these factors justify optimism related to output and Brazil s self-sufficiency in wheat production."

In the Pergamino test fields, Reuters crossed regular farm gates and fences to access the growing area estimated at some 80 hectares where the GM wheat strain was planted.

Bioceres said it has taken strong steps to avoid cross-contamination, including using blockchain technology in a "preserved identity production system" to ensure traceability of the HB4 strain.

The crop is audited at planting and harvesting. Planters must georeference in a computer system the areas planted with HB4 and any work done in those fields. Growers receive financial incentives to ensure compliance and regular inspections are carried out, Bioceres said. Seeds stored in silo bags are monitored until shipment and paperwork documents the chain of custody of the seeds and grains during transport.

Federico Trucco, Bioceres chief executive, said these steps help win over doubters. A new landmark is the recent approval in Nigeria, the only country to fully approve imports of HB4 wheat grains. He said the firm was pushing in Indonesia and Vietnam, as well as North Africa. In Brazil consumers and millers were warming up to GM wheat, he added.

"Approvals are happening much faster than anticipated," Trucco told Reuters in Rosario, where at a nearby laboratory HB4 wheat was being grown to produce seeds, with tall golden heads of the cereal in a specialized greenhouse.

Trucco said Russia s invasion of Ukraine and severe droughts in Europe and China had shifted the needle on drought-tolerant GM wheat. The United Nations has warned that droughts could be the next "pandemic" as global temperatures rise.

"Wheat has a regulatory protein for response to water stress but it is not as good," she said. "It s like the sunflower lends it a good gene. Imagine yourself as a team of soccer players... if you add in Messi to the mix you will obviously do better."