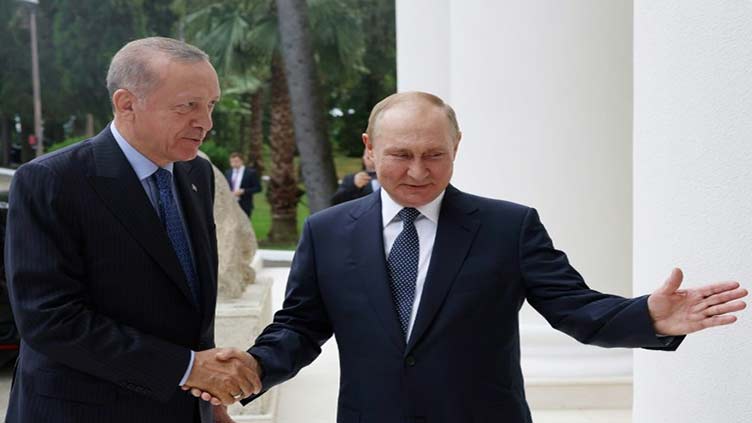 ISTANBUL (AFP) - President Recep Tayyip Erdogan has confirmed that Turkey will start paying for some of its Russian natural gas imports in rubles.

The announcement was initially made by Moscow late Friday after more than four hours of talks between Erdogan and Russian President Vladimir Putin in Sochi.

The United States is leading international efforts to impose economic sanctions on Russia in response to its February invasion of Ukraine.

But NATO member Turkey has tried to remain neutral in the conflict because of its heavy dependence on Russian energy.

Russia accounted for about a quarter of Turkey’s oil imports and 45 percent of its natural gas purchases last year.

"As Turkey, our door is open to everyone," Erdogan was quoted Saturday as telling Turkish reporters on his flight home from Sochi.

"One good thing about this Sochi visit is that we agreed on the ruble with Mr. Putin," Erdogan said.

"Since we will conduct this trade in rubles, it will of course bring money to Turkey and Russia."

Neither Erdogan nor Russian officials have said what portion of the gas will be covered by ruble payments.

The Turkish government is reported to have spent tens of billions of dollars in the past year trying to prop up the lira against steep declines during its latest economic crisis.

The lira has still lost 55 percent of its value against the dollar and consumer prices have soared by 80 percent in the past 12 months.

The crisis has complicated Erdogan’s path to a third decade in power in elections due by next July.

The United States and European Union are trying to pressure Russia’s energy clients from switching to ruble payments to limit Moscow’s ability to wage its war against Ukraine.a

Ruble payments help Russia avoid restrictions on dollar transactions with Moscow that the United States is trying to impose on global banks.

Turkey has refused to join the sanctions regime against Russia and instead pushed for truce talks between Moscow and Kyiv.

Erdogan and Putin pledged in Sochi to expand economic cooperation in sectors including banking and industry.