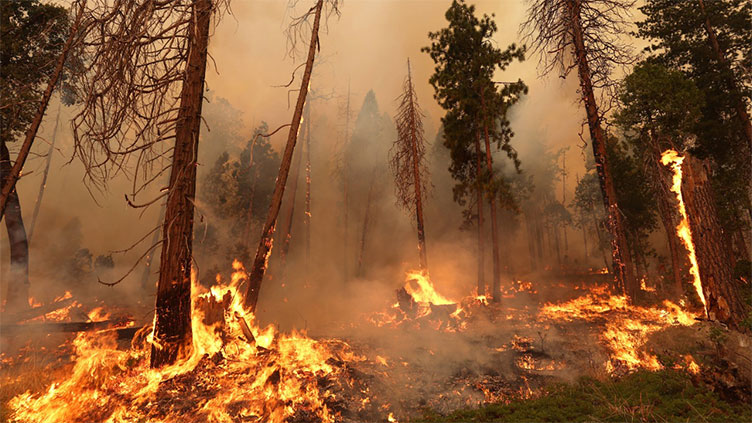 More than 2,000 firefighters backed by 17 helicopters have been deployed against the Oak Fire, which broke out Friday near Yosemite National Park, the California Department of Forestry and Fire Protection (CAL FIRE) said in a report.

But two days after it began the blaze had already consumed more than 14,200 acres (5,750 hectares) and remained zero percent contained, the report said, adding that heat combined with low humidity would "hamper" efforts Sunday.

Described as "explosive" by officials, the blaze has left ashes, gutted vehicles and twisted remains of properties in its wake, as emergency personnel worked to evacuate residents and protect structures in its path.

It has already destroyed 10 properties and damaged five others, with thousands more threatened.

More than 6,000 people had been evacuated, said Hector Vasquez, a CAL FIRE official.

"It was scary when we left because we were getting ashes on us but we had such a visual of this billowing. It just seemed like it was above our house and coming our way really quickly," one woman who had to be evacuated, Lynda Reynolds-Brown, told local news station KCRA.

"We started getting our stuff together and that s when I went back up the hill and looked and I m like,  Oh my God.  It was coming fast," her husband Aubrey Brown told the station.

California Governor Gavin Newsom on Saturday declared a state of emergency in Mariposa County, citing "conditions of extreme peril to the safety of persons and property."

In recent years, California and other parts of the western United States have been ravaged by huge and fast-moving wildfires, driven by years of drought and a warming climate.

Evidence of global warming could be seen elsewhere in the country, as 85 million Americans in more than a dozen states were under a weekend heat advisory.

Asked whether he believes US President Joe Biden should declare a climate emergency, as Biden has said he soon might, Gore was blunt.

And "it s due to get much, much worse, and quickly," he said on NBC.

But he also suggested that recent crises, including deadly heat waves in Europe, could serve as a wake-up call for members of Congress who have so far refused to embrace efforts to combat climate change.

"I think these extreme events that are getting steadily worse and more severe are really beginning to change minds," he said.

The central and northeast US regions face the brunt of the ongoing extreme temperatures, which were not expected to peak until Sunday and have sent public health officials scrambling.

"Numerous record highs are forecast to be tied and/or broken today in the Northeast as highs make a run at the century mark and heat indices range between 105-110 degrees (40.5-43.3 Celsius)," the National Weather Service said Sunday.

A heat emergency is in effect for cities up and down the northeast coast, from Boston to Philadelphia to Washington.

Not even the usually cool Pacific Northwest will escape the far-reaching heat, with the region expected to face several days in the 90s next week.

Cities have been forced to open cooling stations and increase outreach to at-risk communities such as the homeless and those without access to air conditioning.

Various regions of the globe have been hit by extreme heat waves in recent months, such as Western Europe in July and India in March to April, incidents that scientists say are an unmistakable sign of a warming climate.