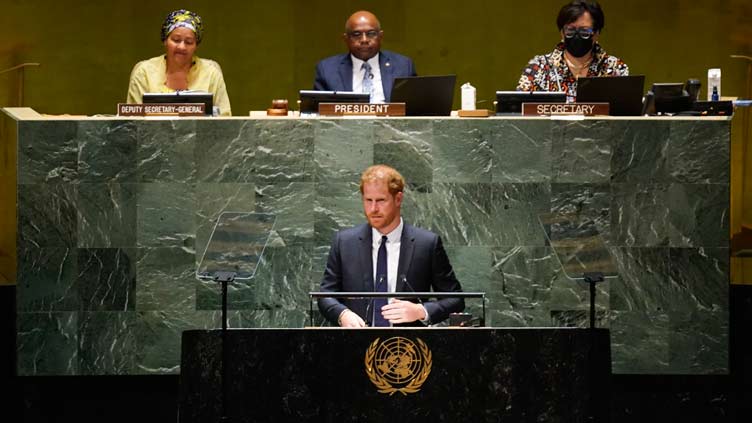 UNITED NATIONS (AP) — Britain’s Prince Harry challenged people everywhere Monday to adopt Nelson Mandela’s spirit of hope in today’s divided world to reclaim democracies and leave a better future for children, movingly citing the inspiration of the anti-apartheid leader on his own life and his memories of his late mother, Princess Diana.

In a keynote and often personal speech to the U.N. General Assembly’s annual celebration Monday of Nelson Mandela International Day, the 37-year-old Duke of Sussex said a photo on his wall of his mother meeting Mandela in Cape Town in March 1997, just five months before her death, is “in my heart every day.”

He spoke about his first visit to Africa as a 13-year-old and how the continent has not only given him hope but become “my lifeline, a place where I have found peace and healing time and time again.”

“It’s where I’ve felt closest to my mother and sought solace after she died, and where I knew I had found my soul mate in my wife,” Harry said as his wife, Meghan, sat listening in the front of the vast General Assembly hall, filled with diplomats from many of the U.N.’s 193 member nations.

As the father of two young children — Archie, 3, and Lilibet, 1 — the prince expressed concern about the planet they and millions of others will inherit.

The world is at “a pivotal moment,” he said, facing converging crises including the COVID-19 pandemic, climate change, a small number of people “weaponizing lies and disinformation at the expense of the many,” the “horrific” war in Ukraine and “the rolling back of constitutional rights here in the United States. ” That was an apparent reference to the U.S. Supreme Court’s recent decision reversing a woman’s constitutional right to an abortion.

“We are witnessing a global assault on democracy and freedom -- the cause of Mandela’s life,” the prince said.

Harry said people have a choice: become apathetic, angry and despair or do what Mandela did every day during his 27 years in prison and the rest of his life including as South Africa’s first Black president, which was to “find meaning and purpose in the struggle.”

He said parents he has met around the world are as determined as Mandela was “to give their children a better shot at a brighter future … because they know the price of inaction will be paid by the next generation.”

The General Assembly established July 18 -- Mandela’s birthday -- as an international day to honor him not only by celebrating his life and contributions but by carrying out the tradition of participating in a community service activity.

Harry challenged people everywhere to commit to celebrating Mandela day not just once a year but every day by carrying out acts of service to improve the world.

“We have an obligation to give as much -- if not more -- than we take,” he said. “Let’s seek out what we have in common, empower all people to reclaim our democracies, and harness the light of Mandela’s memory to illuminate the way forward.”

In January 2020, Harry and Meghan stepped down as senior members of the royal family and moved to the duchess’ native Southern California, citing the unbearable pressure of their roles and racist attitudes of the British media. They visited South Africa in 2019 with their son, Archie, on their first official tour as a family before they gave up royal duties.