Eight candidates in race to become next UK prime minister 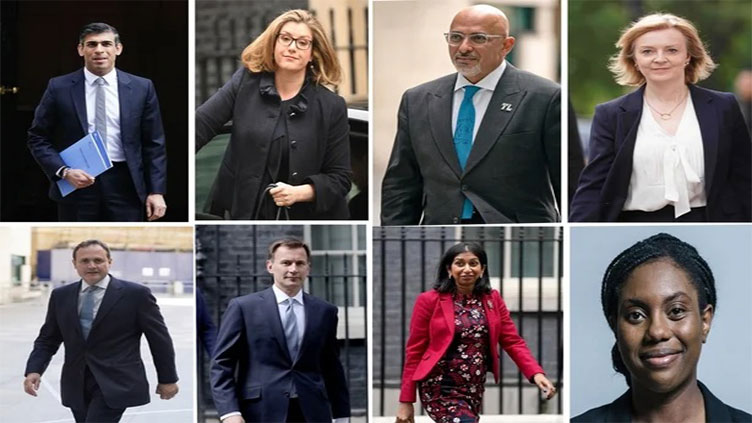 Eight candidates in race to become next UK prime minister

LONDON (AFP) - Eight Conservative MPs will vie to become UK prime minister, the party announced Tuesday, with frontrunner Rishi Sunak launching his campaign by saying he would not "demonise" the outgoing Boris Johnson, despite triggering his demise.

They are joined by outsiders Kemi Badenoch, Suella Braverman, and Tom Tugendhat in Wednesday s first round of voting, where at least one will be eliminated.

Sunak, 42, and health minister Sajid Javid quit last week in protest at Johnson s scandal-hit administration, setting off a wave of government resignations that forced him to step down as Conservative leader.

Javid announced he was running, but pulled out on Tuesday having not gained enough support.

Johnson is staying on in Downing Street as prime minister until the internal party contest finds his successor. The result is due on September 5.

But the main opposition Labour party said it would try to force a vote of no confidence in the government to try to get him out of office sooner.

Labour leader Keir Starmer said that by their actions last week, the Tories had "concluded that the prime minister is unfit for office".

Labour wanted the vote on Wednesday, but the Daily Telegraph reported that the government has refused time to debate the motion.

"As the Prime Minister has already resigned and a leadership process is underway we do not feel this is a valuable use of parliamentary time," the paper cited a government source as saying.

"Should Labour amend their motion appropriately, they can have the next business day for it to be debated."

Sunak, who was appointed chancellor of the exchequer in early 2020 just as the Covid pandemic hit, is the early favourite with bookmakers.

But he refused to distance himself from Johnson s administration, in which he played a key role supporting businesses and workers during the pandemic.

He called Johnson "one of the most remarkable people I ve met".

"Whatever some commentators may say, he has a good heart," he told cheering supporters, after one Johnson ally accused Sunak of being a treacherous "snake".

"I will have no part in a rewriting of history that seeks to demonise Boris, exaggerate his faults or deny his efforts," he added.

Johnson s departure was a spectacular fall from grace for a politician who secured a landslide election win in December 2019 and took the country out of the European Union just a month later.

Sunak said he would not shy away from praising that or recognising Johnson s stewardship of the fightback against Covid or his hawkish support for Ukraine.

He has secured the backing of Transport Secretary Grant Shapps and Justice Secretary Dominic Raab.

Home Secretary Priti Patel -- who like Truss is a favourite of the Tory right -- was rumoured to be about to join the fray but ruled out a bid.

After days of sniping among leading contenders, Patel expressed hope "the contest will be conducted in a good spirit that brings our party together".

Those failing to get 30 votes in Wednesday s vote will be eliminated. A series of votes will be held into next week until there are just two left in the race.

Grassroots party members will then be balloted.

Sunak, who if successful would become Britain s first Hindu prime minister, said he had a plan to steer the country through troubled economic times, not least the soaring cost of living.

But unlike several other candidates, he said it was "not credible to promise lots more spending and lower taxes".

And he rejected claims that as part of Johnson s tarnished administration, he was not the fresh start he was claiming.

He said he had already responded to revelations about his wealthy wife -- after it emerged that she was not paying UK tax on overseas income -- and that he had a green card for US residency even while serving as chancellor.

Sunak and Johnson were also both fined by police for attending a lockdown-breaking party in Downing Street.