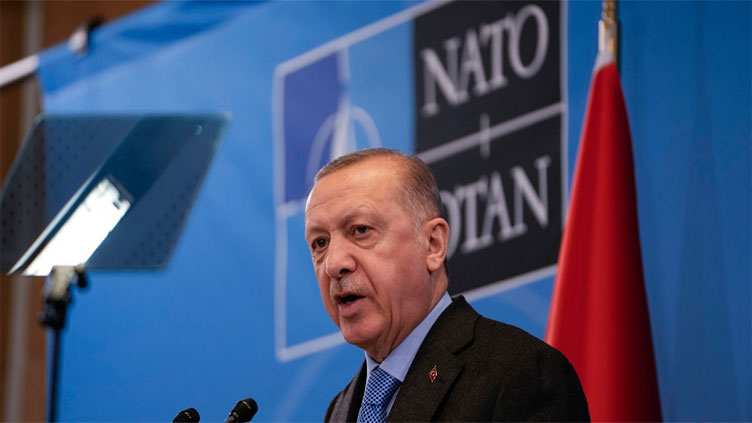 Finnish and Swedish leaders will discuss their stalled NATO bids with Turkish President on Tuesday.

BRUSSELS (AFP) - Finnish and Swedish leaders will discuss their stalled NATO bids with Turkish President Recep Tayyip Erdogan on Tuesday in a push to convince him at the start of a summit in Madrid.

But Ankara said the four-way meeting, which will also involve NATO chief Jens Stoltenberg, did not mean it was close to lifting objections to the two Nordic countries joining the military bloc.

Officials said Monday the leaders will meet in Madrid, in a last-ditch bid to break to deadlock that threatens to overshadow the NATO summit, which will focus on Russia s invasion of Ukraine.

Representatives from Ankara, Helsinki and Stockholm held a fresh round of talks on Monday at NATO s headquarters in Brussels to try to hammer out the differences.

"My strong hope is that this dialogue can be successfully concluded in the near future, ideally before the summit," said Swedish Prime Minister Magdalena Andersson after meeting Stoltenberg in Brussels.

Russia s invasion of Ukraine earlier this year saw the two Nordic countries abandon decades of military non-alignment by applying in May for NATO membership.

But the joint membership bid, initially believed to be a speedy process, has been delayed by objections from NATO member Turkey.

Ankara has accused Finland and Sweden particularly of providing a safe haven for outlawed Kurdish militants whose decades-long insurgency against the Turkish state has claimed tens of thousands of lives.

The Turkish leader has also called on Sweden and Finland to lift arms embargoes imposed against Turkey in 2019 over Ankara s military offensive in Syria.

Erdogan signalled over the weekend that no progress had been made in Sweden s bid to join NATO, urging Stockholm to take "concrete actions" to meet Ankara s concerns.

He said Monday that Turkey "will provide documents and images demonstrating our interlocutors  hypocrisy" towards groups Ankara views as terrorists.

Andersson insisted at NATO that "Sweden is not and will not be a safe haven for terrorists" and said Stockholm had sought to address Turkish concerns over extradition requests lodged by Ankara.

"The relevant authorities work intensively in order to expel persons who could be a security threat," Andersson said.

"And there are a substantial number of cases which are currently being processed."

Turkish officials said Ankara does not view the summit as a final deadline for resolving its objections.

"Participating in this summit does not mean that we will step back from our position," Ibrahim Kalin told HaberTurk channel.

"We are conducting a negotiation. It has many stages."

"We want you to show the same change against the PKK and its affiliated YPG, PYD and similar structures," he said, referring to Kurdish groups operating in Syria and Iraq.

"You have already amended Swedish law. You have launched new police investigations against the PKK and you are currently looking at Turkish extradition requests," he told Andersson.

"These concrete steps represents a paradigm shift in Sweden s approach to terrorism."