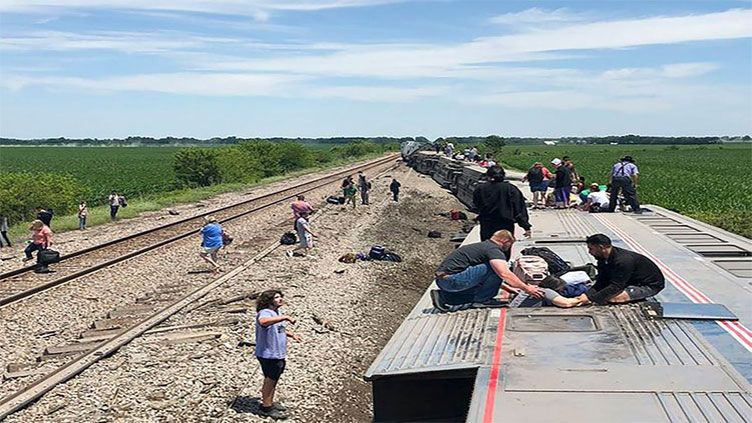 Three people died when a long-distance train collided with a dump truck in the US state of Missouri.

WASHINGTON (AFP) - Three people died Monday when a long-distance train collided with a dump truck in a rural region of the US state of Missouri, leaving multiple passengers injured, local officials said.

Seven of the Amtrak train s approximately eight cars derailed on a route from Los Angeles to Chicago when it struck the truck at a rail crossing southwest of Mendon, Missouri.

Railcars were seen toppled on their sides along a farm field as passengers climbed out the windows and doors in images posted to social media.

"It all happened like slow motion. It started to rock and, and rock, and then flicker, and then it just all of a sudden -- all this dust was through my window," Robert Nightingale, who had been asleep in the train, told CNN.

Blocked in his car, he climbed into a hallway before exiting through the side of the train, he said, adding that the dump truck appeared to have been carrying big boulders.

Justin Dunn, a spokesman for the Missouri State Highway Patrol, told reporters at a press conference that the investigation "is in its preliminary stages."

The train was carrying more than 200 passengers and around a dozen crew when it crossed the intersection on a gravel road, which officials said had neither lights nor electronic control devices marking the tracks, which is common in rural areas.

"There are multiple injuries and we can confirm there were three fatalities -- two on the train and one in the dump truck," Dunn said.

Emergency responders from surrounding counties arrived at the scene and some injured were carried to trauma centers in medical helicopters, officials said.

The National Transportation Safety board, the US agency responsible for investigating transportation incidents, said on Twitter that a 14-member team would probe the derailment.

The accident comes one day after another Amtrak-operated train collided with a passenger vehicle at a railroad crossing in California, resulting in three deaths.

The crossing involved did not have guards, and a local fire official said it was not uncommon to have accidents there, the local NBC affiliate reported.