EU grants candidate status to Ukraine as US ships weapons 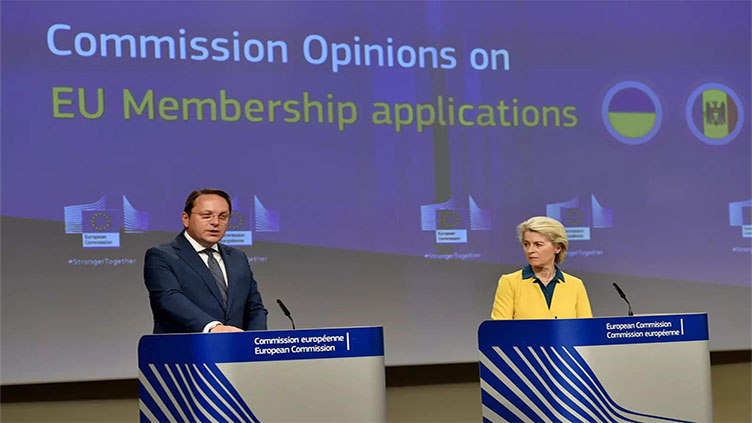 EU grants candidate status to Ukraine as US ships weapons

The West s latest attempts to rally behind Ukraine came as Russia closed in on key cities in the country s embattled east and prompted growing global concerns with restrictions in gas and grain exports.

Ukraine s President Volodymyr Zelensky hailed the EU decision on his country and Moldova as "a unique and historic moment", although the two former Soviet republics face a long path before joining the bloc and its benefits of free movement and a common market.

"Ukraine s future is within the EU," said Zelensky, who had been working the phones for weeks.

"We will win, rebuild, enter the EU and then will rest. Or probably we will not rest."

French President Emmanuel Macron said that the decision by EU leaders sent a "very strong signal" to Russia that Europeans support the pro-Western aspirations of Ukraine.

President Vladimir Putin had declared Ukraine to be part of Moscow s sphere and insisted he was acting due to attempts to bring the country into NATO, the Western alliance that comes with security guarantees.

European powers before the invasion had distanced themselves from US support for Ukraine s NATO aspirations and EU membership is at least years away.

Ukraine and Moldova will have to go through protracted negotiations and the European Union has laid out steps that Kyiv must take even before that, including bolstering the rule of law and fighting corruption.

The White House announced that it was sending another $450 million in fresh weapons to Ukraine including new High Mobility Artillery Rocket systems, which have been at the top of Kyiv s wish list.

An initial four units have already been delivered, with Ukrainian soldiers being trained to operate the equipment, after President Joe Biden s administration said Kyiv had offered assurances it would not fire into Russia.

Ukraine s needs have been increasingly urgent as Russia -- which failed to take Kyiv immediately after invading on February 24 -- advances in the east, tightening its grip on strategically important Severodonetsk and its twin city Lysychansk across the Donets river.

Taking the cities would give Moscow control of the whole of Lugansk, allowing Russia to press further into the Donbas region and potentially farther west.

Ukraine acknowledged Thursday that it had lost control of two areas from where it was defending the cities, with Russian forces now closer to encircling the industrial hubs.

Britain s defence ministry said some Ukrainian units had probably been forced to withdraw "to avoid being encircled".

"Russia s improved performance in this sector is likely a result of recent unit reinforcement and heavy concentration of fire," it said in its latest intelligence update.

A representative of pro-Russian separatists in Ukraine told AFP the resistance of Ukrainian forces trying to defend Lysychansk and Severodonetsk was "pointless and futile."

"At the rate our soldiers are going, very soon the whole territory of the Lugansk People s Republic will be liberated," said Andrei Marochko, a spokesman for the army of Lugansk.

The northeastern city of Kharkiv near the Russian border was nearly empty on Wednesday, AFP reporters said, a day after shelling by Moscow s forces killed five people there.

"Last night the building next to mine collapsed from the bombardment while I was sleeping," said Leyla Shoydhry, a young woman in a park near the opera house.

Roman Pohuliay, a 19-year-old in a pink sweatshirt, said most residents had fled the city.

"Only the grannies are left," he said.

In the central city of Zaporizhzhia, women were training to use Kalashnikov assault rifles in urban combat as Russian forces edged nearer.

"When you can do something, it s not so scary to take a machine gun in your hands," said Ulyana Kiyashko, 29, after moving through an improvised combat zone in a basement.

Western officials have also accused Russia of weaponising its key exports of gas as well as grain from Ukraine, contributing to global inflation and rising hunger in the world.

"We are very clear that this grain crisis is urgent, that it needs to be solved within the next month," British Foreign Secretary Liz Truss said on a visit to Turkey.

"Otherwise we could see devastating consequences," she said.

A US official warned of new retaliatory measures against Russia at the Group of Seven summit being attended by Biden in Germany starting Sunday.

Germany ratcheted up an emergency gas plan to its second alert level, just one short of the maximum that could require rationing in Europe s largest economy, after Russia slashed its supplies.

"Gas is now a scarce commodity," Economy Minister Robert Habeck told reporters, urging households to cut back on use. Demand for gas is lower in the summer but shortages could cause heating shortages in the winter.

France is aiming to have its gas storage reserves at full capacity by early autumn, and will build a new floating methane terminal to get more energy supplies by sea, Prime Minister Elisabeth Borne said.

A Kremlin spokesman reiterated its claim that the supply cuts were due to maintenance and that necessary equipment from abroad had not arrived.