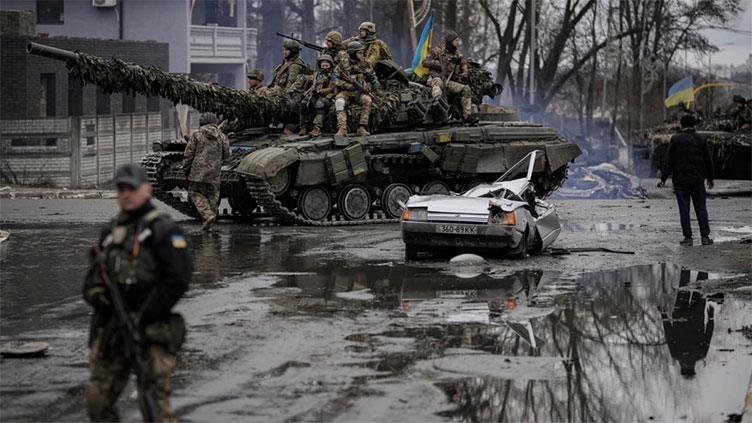 The row over Lithuania, the arrival of sophisticated German weaponry in Ukraine s arsenal and an imminent decision on Kyiv s candidacy to join the European Union threaten to further ratchet up tensions between the West and Moscow.

Kremlin troops were meanwhile gaining ground in the Donbas, causing "catastrophic destruction" in Lysychansk, an industrial city at the forefront of recent clashes, the region s governor said. Ukraine confirmed Russia had taken the frontline village of Toshkivka.

Governor Sergiy Gaiday said "every town and village" in Ukrainian hands in the Lugansk region was "under almost non-stop fire".

Since being repelled from Kyiv and other parts of Ukraine following its invasion in February, Moscow has been focusing its offensive on the Donbas region.

In the eastern city of Sloviansk, which could become a flashpoint as Russian troops advance from the north, local people were preparing to withstand attacks and the authorities said the community would defend itself.

Russia s war of words with EU member Lithuania escalated on Tuesday, with Moscow vowing "serious" consequences over Vilnius  restrictions on rail traffic to the exclave of Kaliningrad that borders Lithuania and Poland.

Lithuania says it is simply adhering to EU-wide sanctions on Moscow but Russia countered, accusing Brussels of "escalation".

The United States made clear its commitment to Lithuania as an ally in NATO, which considers an attack against one member an attack on all.

"We stand by our NATO allies and we stand by Lithuania," State Department spokesman Ned Price told reporters in Washington.

Two other Americans were captured last week in eastern Ukraine.

A White House spokesman, John Kirby, voiced alarm at Russian statements that it would not apply the Geneva Conventions on the humane treatment of prisoners to the pair.

"It s appalling that a public official in Russia would even suggest the death penalty for two American citizens that were in Ukraine," Kirby told reporters.

Spain also said one of its citizens fighting for Ukraine had been killed, without giving further detail.

Ukraine has been seeking membership in the European Union after earlier failing to join NATO.

Ukrainian President Volodymyr Zelensky, who has found hero status in Europe for resisting the invasion, said that he was working the phones to drum up support for EU membership.

"I will do everything for a historic decision of the European Union to be approved. It is important for us," he said in a daily address.

Russia said Tuesday it had repelled a Ukrainian attempt to retake the symbolic Snake Island, a small territory in the Black Sea captured by Russian forces on the first day of the invasion.

In addition to Toshkivka, Ukraine said it had lost control of the eastern village of Metyolkine, a settlement adjacent to Severodonetsk, which has been a focus of fighting for weeks and is now largely under Russian control.

A chemical plant in Severodonetsk where hundreds of civilians are said to be sheltering was being shelled constantly, Ukrainian officials said.

Ukraine on Tuesday said it struck a Black Sea oil drilling platform off the Crimea peninsula because Russia was using it as a military installation.

On the sea, Russia s navy is blockading ports, which Ukraine says is preventing millions of tonnes of grain from being shipped to world markets, contributing to soaring food prices.

Prior to the war, Ukraine was a major exporter of wheat, corn and sunflower oil.

Moscow denies Western charges it is responsible for the disruption to deliveries.

Turkish media reported that Russian, Ukrainian and UN officials would meet in Istanbul next week to try to unblock Black Sea grain exports.

Ukraine, its Western backers and the International Criminal Court have all vowed to seek accountability over the war.

A search for bodies remains underway in the Kyiv region, where the police chief said that 1,333 civilians have been discovered and 300 people remain missing.

"There is no place to hide," Garland said.

Ukraine s Prosecutor General Iryna Venediktova said Kyiv was looking for special equipment and expertise from the United States, including in recovering assets.

Legal support is just as needed "as the supply of arms to fight with the Russian Federation, which commits unprecedented, large-scale atrocities against the civilian population of our state," she wrote on Facebook.

Ukraine has called the reasons given for Russia s reduction of gas supply to European customers "far-fetched" and "illegal".