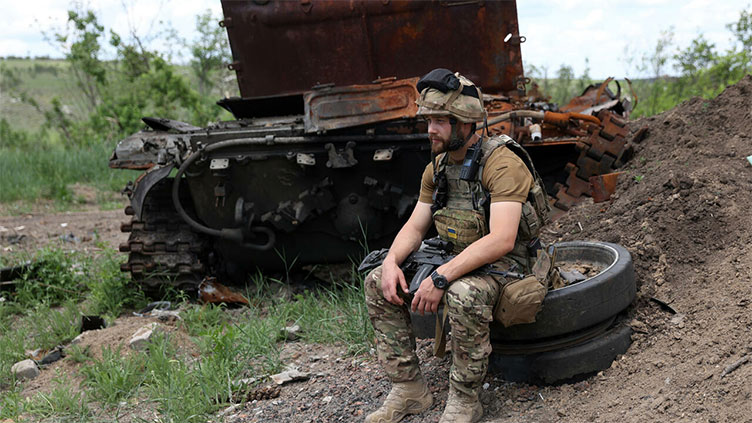 LYSYCHANSK (AFP) - Ashes littered a square in the war-ravaged east Ukrainian city of Lysychansk Friday as smoke rose from a cultural centre following a Russian air strike that killed four people sheltering there.

The embattled city is preparing for a possible street battle, with Russian troops fighting Ukrainian soldiers in the city of Severodonetsk, just across the river.

The bombing on Thursday sparked a fire that raged through the blue and white-painted Stalin-era Diamant Palace of Culture overnight and was still burning on Friday.

The building contained a library and post office as well as a stage for arts events. After the war began, it became used a bomb shelter by locals and a makeshift refuge for those who lost their homes.

A mother and daughter were killed, as well as a young man and a bedridden woman who had moved there to shelter from her home in Severodonetsk, locals standing around said.

Police said that around 10 were injured, some seriously injured after being trapped by debris, while there were around 10 others inside the building, while locals suggested the figure was higher.

Police said those seriously hurt were taken to hospital in the nearby city of Bakhmut -- since Lysychansk s hospital has no electricity.

The attack came after Russian forces bombed a theatre where civilians were sheltering in the besieged port city of Mariupol in March.

"Who knows -- maybe it was the same reason that they bombed Mariupol too," said Jaconda, suggesting a pro-Russian local could have passed information on troop locations.

A group of local residents stood nearby with bags ready to be evacuated by police to a safer city.

One, Alla Bor, said she had not resolved to leave until the Palace of Culture attack.

"I got scared. We re abandoning everything and going. No one can survive such a strike," said the history teacher, waiting with her son-in-law Volodymyr and 14-year-old grandson.

"We are abandoning everything, we are leaving our house. We left our dog with food. It s inhumane but what can you do?"

"There is more and more firing," he said.

Preparations were afoot in the city for possible street fighting with Russians as a battle continued for the city of Severodonetsk on the opposite river bank.

Across the river in the city of Severodonetsk, an AFP photographer heard sounds of street fighting.

A tractor dragged a burnt-out car to place partly across a main street to slow vehicles.

Across the river in the city of Severodonetsk, an AFP photographer heard sounds of street fighting .

"There could be shooting starting here soon," policeman Jaconda tried to persuade a local man who was reluctant to leave his home.

"You could end up encircled," Jaconda warned, adding: "There won t be life here," while by evacuating, "you ll at least be safe and sound."

Amid tensions between officials and the local population, Jaconda told an AFP reporter quietly: "Many of those who stayed are awaiting the Russian world," referring to Russian President Vladimir Putin s drive to restore Russian influence in neighbouring countries.

Locals were clinging to life in the city despite nearby shelling.

A group of residents showed AFP the cold and damp cellar where they shelter from rockets and one bombed-out family lives full-time, including a 70-year-old woman and her husband, who is unable to walk after a stroke.

Lacking running water or power, they were boiling a kettle and frying eggs in their apartment building s courtyard on a camp fire, using branches snapped off by shelling.

"Our country doesn t help us, our country has forgotten us. We are helped by ordinary people volunteering," said one, Nataliya, 47.

Ukrainian troops were busy on roads to and from the city, with trucks carrying Grad systems.

As an AFP team drove out of the city, smoke rose from a large agricultural building beside the road and rubble was strewn across the highway.

Soldiers were busily removing concrete slabs as others dug trenches nearby. They said that the strike had occurred 10 to 15 minutes earlier and no one had been injured, while declining to say what was in the building.