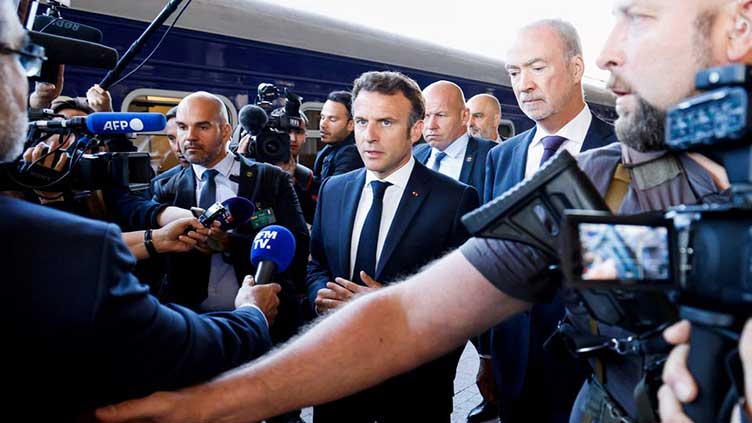 IRPIN, Ukraine (Reuters) - President Volodymyr Zelenskiy on Thursday won backing from the leaders of France, Germany, Italy and Romania to give Ukraine European Union candidate status, while urging them to send more weapons and impose tougher sanctions on Russia.

In the first such visit to the capital since Russia invaded on Feb. 24, France’s Emmanuel Macron, Germany’s Olaf Scholz, Italy’s Mario Draghi and Romania’s Klaus Iohannis said Ukraine belonged in the "European family".

Ukraine has urged the EU to clear a path to membership, but such a move has caused some misgivings in the 27-member bloc. The meeting came a day before the European Commission is due to make a recommendation on Ukraine’s status as an EU candidate.

After earlier batting away suggestions of being soft on Russia, Macron said the West would not demand any concessions from Ukraine and that the circumstances of peace talks would be on Kyiv’s terms.

Zelenskiy, who has not left Ukraine since the invasion and was dressed in a khaki t-shirt, has voiced gratitude for the West’s help, though his administration also previously berated allies for dragging their feet on sanctions and arms supplies.

"My colleagues and I came here to Kyiv today with a clear message: ‘Ukraine belongs to the European family’," Scholz said, while Macron said, "We all four support the immediate EU candidate status" for Ukraine, adding: "Europe is by your side, and will remain so for as long as necessary, all the way to victory."

Ukraine has asked for more weapons to turn the tide of the war decisively in its favour after enduring losses of 100-200 soldiers a day in a fierce battle for control of its eastern Donbas region. EU leaders, meanwhile, have grappled with keeping domestic opinion onside as the economic costs of the war and rising prices hit home.

"Every day of delay or delayed decisions is an opportunity for the Russian military to kill Ukrainians or destroy our cities," he said. "There is a direct correlation: the more powerful weapons we get, the faster we can liberate our people, our land."

During the talks, Zelenskiy pressed for a seventh EU sanctions package that included an embargo on Russian gas. The visit coincided with Russia reducing supplies via its Nord Stream pipeline in what Berlin saw as a political move.

Scholz said Germany would support Ukraine’s path to EU membership but also said requirements on democracy and rule of law would need to be complied with.

Arriving on a night train as air raid sirens blared in Kyiv, the EU leaders had first walked around ruined buildings and wrecked cars in the nearby town of Irpin, the scene of heavy fighting early in the invasion.

The Irpin tour was designed to highlight what Ukraine and its backers say were large-scale atrocities committed by Russian troops, what Scholz described as the scene of "unimaginable cruelty" and "senseless violence".

Standing by gutted, burnt-out buildings, the leaders looked stern as they listened to a Ukrainian minister explaining what had happened there.

They were shown the wreckage of a car which Ukraine says was targeted by Russian troops when a mother and children were inside. Russia denies allegations that its forces committed atrocities.

"It’s a heroic city...marked by the stigma of barbarism," Macron told reporters.

Commenting on the visit, the Kremlin said the leaders should use their time with Zelenskiy to take a "realistic look at the state of affairs" rather than discussing more arms shipments to Kyiv.

Dmitry Medvedev, deputy head of Russia’s Security Council, mocked the visit as having "zero use" and having "promised EU membership and old howitzers to Ukraine".