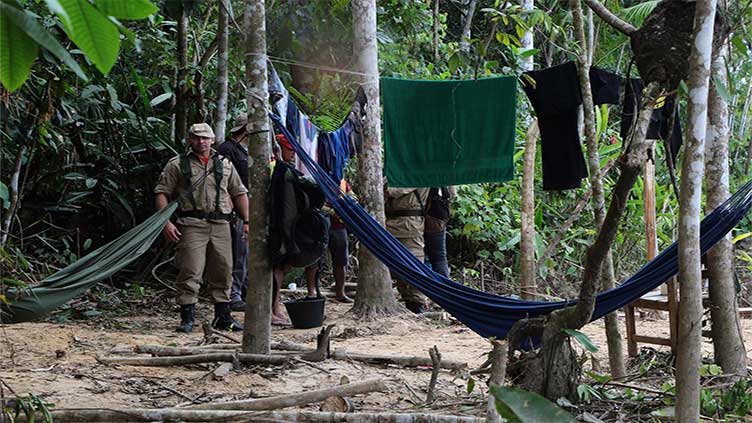 A man reported to be Oliveira's brother, Amarildo da Costa de Oliveira, was arrested on June 7.

BRASILIA (AFP) - Human remains were found buried at a site in the Brazilian Amazon during a search for a missing British journalist and an Indigenous expert, a minister said Wednesday.

Earlier in the day, a suspect in the case was taken by police to the search site along the Itaquai River, media reports said.

Dom Phillips and his guide Bruno Pereira went missing June 5 in a remote part of the Amazon that is rife with environmental crimes including illegal mining, fishing and logging, as well as drug trafficking.

"I was just informed that human remains were found in the place where digging was taking place," Justice Minister Anderson Torres said on Twitter ahead of a press conference announced by police to give an update on the case.

Torres  comment came after media reports said two detainees in the case told police that the missing men had been killed and confessed to involvement. Authorities have not confirmed these reports.

The suspect taken to the digging spot has been identified as 41-year-old Oseney da Costa Oliveira.

He was arrested Tuesday in Atalaia do Norte, the small northern city that Phillips and Pereira were returning to when they disappeared in the remote Javari Valley after receiving threats during a reporting trip.

Phillips, 57, a long-time contributor to Britain s The Guardian and other leading international newspapers, was working on a book on sustainable development in the Amazon.

Pereira, highly regarded advocate for the region s Indigenous peoples, was acting as his guide.

President Jair Bolsonaro had said Monday that entrails were found in the water during search operations, but police never confirmed this.

The day before, police said they had found personal effects belonging to the two missing men.

Bolsonaro -- whose government has been accused of dragging its feet in the investigation -- drew fresh criticism Wednesday for saying a Phillips was "disliked" for his reporting on the region and should have been more careful.

"That Englishman was disliked in the region, because he wrote a lot of articles against illegal gold miners (and) environmental issues," Bolsonaro said.

"A lot of people didn t like him. He should have more than redoubled the precautions he was taking. And he decided to go on an excursion instead," he told journalist Leda Nagle in an interview for her YouTube channel.

"All signs indicate that if they were killed -- and I hope that s not the case -- they re in the water, and in the water there won t be much left. I don t know if there are piranhas in the Javari," Bolsonaro added.

He again appeared to blame the missing men, saying it was "very reckless to travel in that region without being sufficiently prepared, physically and with weapons."

His comments triggered an outcry from critics.

Opposition lawmaker Orlando Silva agreed, tweeting: "The victims are not the ones to blame."

"The government has an obligation to protect the country and not incentivize the criminals controlling the region."