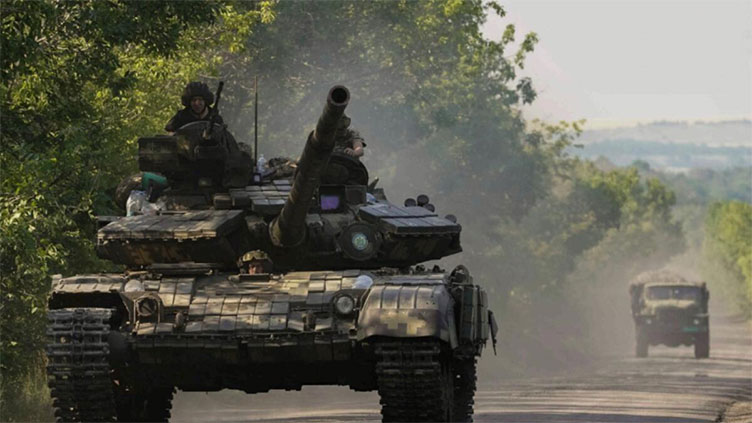 Ukraine said its forces had been pushed back from the centre of key industrial city Severodonetsk.

KRAMATORSK (AFP) - Ukraine said Monday its forces had been pushed back from the centre of key industrial city Severodonetsk, where President Volodymyr Zelensky said the fighting was taking a "terrifying" toll as casualties soar.

With Russia s 16-week war of attrition pushing Ukrainian resistance to the limit, Kyiv has reiterated its plea for Western nations to provide additional arms to help it contain Moscow s aggression.

The twin cities of Severodonetsk and Lysychansk have been targeted for weeks as the last areas still under Ukrainian control in the eastern Lugansk region.

Regional governor Sergiy Gaiday said Monday Russian forces control 70 to 80 percent of Severodonetsk but had not captured or encircled it.

"They destroyed all the bridges, and getting into the city is no longer possible. Evacuation is also not possible," he told Radio Free Europe.

Zelensky, in his daily address to the Ukrainian people, said "the human cost of this battle is very high for us. It is simply terrifying."

Last week in a rare disclosure of casualty figures, Ukraine s Defence Minister Oleksiy Reznikov said up to 100 of his troops were dying daily and 500 sustaining injuries -- a rise from the 60-100 Ukrainian soldiers Zelensky estimated on June 1 that were dying daily.

Now, with a ring tightening on the Lugansk region, Ukrainian forces in the area had two choices, "to surrender or die", said Eduard Basurin, a representative for pro-Russian separatists.

The capture of Severodonetsk would open the road to Sloviansk and another major city, Kramatorsk, in Moscow s push to conquer Donbas, a mainly Russian-speaking region partly held by pro-Kremlin separatists since 2014.

Ukrainian forces were fighting for "every town and village where the occupiers came", Zelensky said on Monday in a message to mark the eighth anniversary of the liberation of Mariupol in the earlier conflict.

In May, Russian troops captured the port city in southern Ukraine after a weeks-long siege.

"We are once again fighting for it and all of Ukraine," Zelensky said.

On Monday, Amnesty International accused Russia of war crimes in Ukraine, saying that attacks on the northeastern city of Kharkiv -- many using banned cluster bombs -- had killed hundreds of civilians.

"The repeated bombardments of residential neighbourhoods in Kharkiv are indiscriminate attacks which killed and injured hundreds of civilians, and as such constitute war crimes," the rights group said in a report on Ukraine s second-biggest city.

In Bucha, a town near Kyiv synonymous with war crimes allegations, local police said they had discovered another seven bodies in a grave.

Dozens of bodies in civilian clothing were found in the town in April after Russian troops withdrew from the area following a month-long occupation.

Pryluky, which lies about 150 kilometres (90 miles) east of the capital, is home to a military airfield.

Separatist authorities in the city of Donetsk said three people were killed and four wounded in Ukrainian shelling on a market.

Russia s invasion of its neighbour has prompted Finland and Sweden to give up decades of military non-alignment and seek to join the NATO alliance.

In terms of security, Sweden is "in a better place now than before it applied", NATO chief Jens Stoltenberg said Monday, even though its application is in limbo with Turkey currently withholding its approval.

Stoltenberg said NATO was working "hard and actively" to resolve Ankara s concerns "as soon as possible" ahead of a June 15 meeting.

It was at the Brussels summit that Kyiv said Monday it was hoping for a decision on further Western arms deliveries to support its war effort.

Far from the war, World Trade Organization members were gathering in Geneva to address the threat posed to global food security by Russia s invasion.

Ukraine s deputy agriculture minister on Monday said a quarter of his country s arable land had been lost but insisted national food security was not threatened.

On a farm near the southern Ukrainian city Mykolaiv, the harvest has been delayed by the need to undo damage by Russian troops who passed through the area in March.

"We planted really late because we needed to clear everything beforehand," including bombshells, Nadiia Ivanova, 42, told AFP.

The farm s warehouses currently hold 2,000 tonnes of last season s grain but there are no takers.

The railways have been partially destroyed by the Russian army, while any ship that sails faces the threat of being sunk.