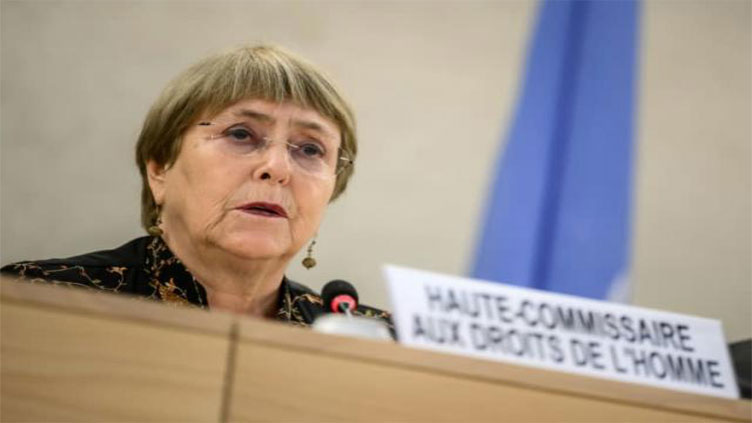 GENEVA (AFP) - UN rights chief Michelle Bachelet said Monday she will not seek a second term, ending months of speculation, insisting she wanted to spend more time with her family in Chile.

"As my term as High Commissioner draws to a close, this Council s milestone 50th session will be the last which I brief," Bachelet told the diplomats gathered in Geneva.

Speculation has been rife for months about her plans.

But Bachelet told reporters "this is not something new," saying she had informed UN Secretary General Antonio Guterres two months ago of her decision to leave "for personal reasons".

"After a long and rich career, I want to go back to my country, to my family," she said.

Guterres said in a statement he was "deeply grateful to Michelle Bachelet for her relentless service" as rights chief.

Bachelet, he said, "lives and breathes human rights," and "has moved the needle in an extremely challenging political context... She has made a profound difference for people around the globe."

The post of High Commissioner for Human Rights typically faces heavy political pressure from countries around the world, and while it can be held for a maximum of two terms, nearly all of Bachelet s predecessors have avoided staying on for more than one term.

But there had been speculation that Bachelet, who has largely avoided harsh public criticism of countries, might be eying more time.

When Guterres appointed her in 2018, it was clear she was meant to mark a break with the repeated declarations of outrage by her very outspoken predecessor Zeid Ra ad Al Hussein of Jordan.

Bachelet, who went from torture victim under Augusto Pinochet to become the first woman to serve as president of Chile, has instead emphasised the importance of dialogue and discreet diplomacy in forwarding rights in various countries.

"Continue to seek dialogue" she told the council Monday as she presented an overview of human rights concerns around the world.

"Be willing to hear the other, to understand respective points of view and to actively work towards identifying common ground."

This approach has not sat well with some and she has faced significant pushback over her restraint, especially when it comes to China.

She has faced mounting criticism from countries and NGOs for not speaking out more forcefully against allegations of widespread rights abuses in the country, including during her long-awaited trip there last month -- the first in 17 years by a UN rights chief.

The criticism "has no relationship" with the decision not to take on a second term, she told journalists.

"Having been president twice, I have received a lot of criticism in my life," she pointed out. "That s not what makes me take certain positions."

Bachelet meanwhile vowed that a long-awaited report on the rights situation in the Xinjiang region, where China is alleged to have detained over a million Uyghurs and other Muslim minorities, will be published before she steps down on August 31.

She told the council that the report was currently "being updated", and that it would "be shared with the government for factual comments before publication."

Countries and NGOs have become increasingly impatient to see that report, which they say has been ready for months.

"It is important that she not let that process run out the clock on her term and hand the report to her successor," Human Rights Watch chief Ken Roth told AFP Monday.

He warned that Bachelet s focus on seeking dialogue with Chinese President Xi Jinping "lacks the pressure that alone might persuade him to ease his repression".

He urged Guterres to pick "a successor who is comfortable using the office s most important tool to improve human rights practices -- the willingness to speak out against even the most powerful human rights abusers."