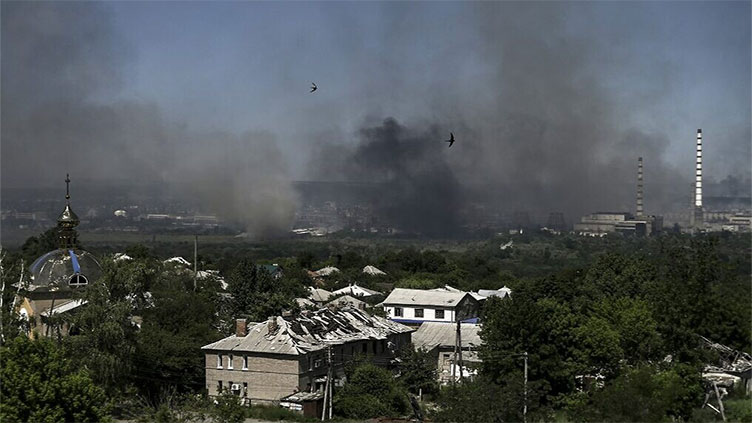 Russian forces said they had struck a site in western Ukraine storing US- and EU-supplied weapons.

KRAMATORSK (AFP) - Russian forces said Sunday they had struck a site in western Ukraine storing US- and EU-supplied weapons, as fighting intensified in an eastern region where the country s top commander said the land "is covered in blood."

The strike on the town of Chortkiv, a rare attack by Russia in the relatively calm west of Ukraine, left 22 people injured, the regional governor said.

Meanwhile the situation in Severodonetsk was "extremely difficult", after the Russian army destroyed a second bridge into the city and was heavily bombarding the last one, regional governor Sergiy Gaiday said.

Valeriy Zaluzhny, commander-in-chief of the Ukrainian military, said Russia s massed artillery in that region gave it a tenfold advantage.

But, he added in a Facebook post, "Despite everything, we continue to hold positions. Every meter of Ukrainian land there is covered in blood -- but not only ours, but also the occupier s."

Russia s invasion of Ukraine, which began February 24, has killed thousands of soldiers and civilians, displaced millions and reduced swathes of the country to rubble.

In his evening video statement, he said Russia was deploying undertrained troops and using its young men as "cannon fodder."

Away from the battlefield, World Trade Organization members gathered in Geneva Sunday with, at the top of a challenging agenda, the need to tackle global food security threatened by Russia s invasion of wheat-producing Ukraine.

Then, just before Russian Minister of Economic Development Maxim Reshetnikov spoke, around three dozen delegates "walked out", the spokesman said.

That came a day after the head of the European Commission promised Ukraine would receive a clear signal within a week on its bid to join the European Union.

"Ukraine has achieved a lot in the past 10 years and much still needs to be done. Our opinion will reflect this carefully," Commission head Ursula von der Leyen said at the end of a surprise visit to Kyiv.

EU leaders are expected to approve the bid at an upcoming summit, although with strict conditions attached.

The war has prompted Finland and Sweden to give up decades of military non-alignment and seek to join the NATO alliance.

However, Turkey is blocking their bids and NATO chief Jens Stoltenberg said Sunday the issue may not be resolved by an alliance summit later this month.

Russia s defence ministry said the strike on Chortkiv destroyed a "large depot of anti-tank missile systems, portable air defence systems and shells provided to the Kyiv regime by the US and European countries".

Regional governor Volodymyr Trush said four missiles fired Saturday evening from the Black Sea had partially destroyed a military installation in the town, about 140 kilometres (85 miles) from the border with Romania.

In the east, which along with the south has borne the brunt of Russian firepower, Severodonetsk and nearby Lysychansk have been targeted for weeks as the last areas in the Lugansk region still under Ukrainian control.

He said Russia was shelling the Azot chemical plant, where about 800 civilians have reportedly taken refuge.

He told reporters pro-Russian forces were not pressing aggressively "because it is a chemical industry facility", warning of the risk of "an environmental catastrophe".

But plant officials working with the International Atomic Energy Agency have succeeded in restoring transmission, the IAEA said.

Rafael Grossi, director general of the UN agency, said it still wanted to send inspectors to the plant "as soon as possible."

Alongside the physical fighting, the war is being played out through the courts.

Pro-Moscow separatist authorities in the Donetsk region this week sentenced to death two Britons and a Moroccan for fighting with Kyiv.

The sentences sparked outrage in Western countries, but separatist Donetsk leader Denis Pushilin said Sunday he would not alter them.

"They came to Ukraine to kill civilians for money," he told reporters, calling the punishment "perfectly fair".

The families of Britons Aiden Aslin and Shaun Pinner say they have been living in Ukraine since 2018.