China will 'not hesitate to start war' over Taiwan, Beijing tells US 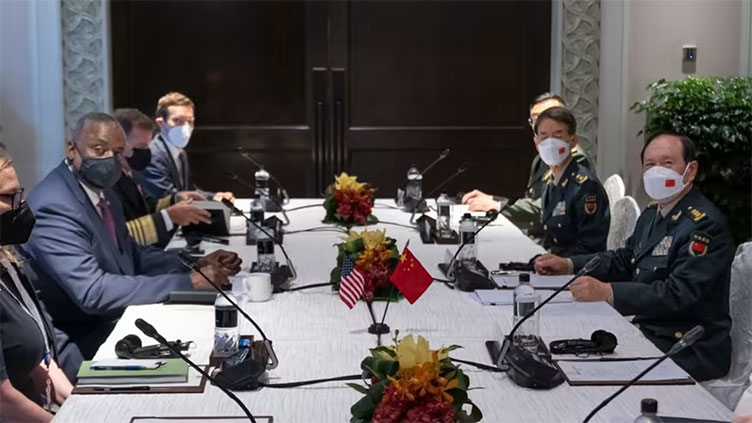 China will 'not hesitate to start war' over Taiwan, Beijing tells US

Beijing will "not hesitate to start a war" if Taiwan declares independence, China told US.

SINGAPORE (AFP) - Beijing will "not hesitate to start a war" if Taiwan declares independence, China s defence minister warned his US counterpart Friday, the latest salvo between the superpowers over the island.

The warning from Wei Fenghe came as he held his first face-to-face meeting with US Defence Secretary Lloyd Austin on the sidelines of the Shangri-La Dialogue security summit in Singapore.

Beijing views democratic, self-ruled Taiwan as its territory and has vowed to one day seize the island, by force if necessary, and US-China tensions over the issue have soared in recent months.

Wei warned Austin that "if anyone dares to split Taiwan from China, the Chinese army will definitely not hesitate to start a war no matter the cost", defence ministry spokesman Wu Qian quoted the minister as saying during the meeting.

The Chinese minister vowed that Beijing would "smash to smithereens any  Taiwan independence  plot and resolutely uphold the unification of the motherland", according to the Chinese defence ministry.

He "stressed that Taiwan is China s Taiwan... Using Taiwan to contain China will never prevail", the ministry said.

Austin "reaffirmed the importance of peace and stability across the (Taiwan) Strait, opposition to unilateral changes to the status quo, and called on (China) to refrain from further destabilising actions toward Taiwan", according to the US Department of Defense.

Tensions over Taiwan have escalated in particular due to increasing Chinese aircraft incursions into the island s air defence identification zone (ADIZ).

US President Joe Biden, during a visit to Japan last month, appeared to break decades of US policy when, in response to a question, he said Washington would defend Taiwan militarily if it is attacked by China.

The White House has since insisted its policy of "strategic ambiguity" over whether or not it would intervene has not changed.

The world must be "prepared for the emergence of an entity that tramples on the peace and security of other countries by force or threat without honouring the rules," he said.

He did not mention China by name in his address, but repeatedly called for the "rules-based international order" to be upheld.

Austin is the latest senior US official to visit Asia as Washington seeks to shift its foreign policy focus back to the region from the Ukraine war.

As well as on Taiwan, China and the United States have been locked in a range of other disputes.

They have been at loggerheads over Russia s invasion of Ukraine, with Washington accusing Beijing of providing tacit support for Moscow.

China has called for talks to end the war, but has stopped short of condemning Russia s actions and has repeatedly criticised American arms donations to Ukraine.

Beijing claims almost all of the resource-rich sea, through which trillions of dollars in shipping trade passes annually, with competing claims from Brunei, Malaysia, the Philippines, Taiwan and Vietnam.

Austin arrived in Singapore late Thursday, and held a series of meetings with his counterparts on Friday.

At a meeting with Southeast Asian defence ministers, he spoke about Washington s "strategy in maintaining an open, inclusive and rules-based regional security environment", according to a statement from the Singapore government.

His comments were a veiled reference to countering China s increasing assertiveness in the region.

Austin will deliver a speech at the forum on Saturday, followed by Wei on Sunday. The summit runs from June 10 to 12 and is taking place for the first time since 2019 after twice being postponed due to the Covid-19 pandemic.