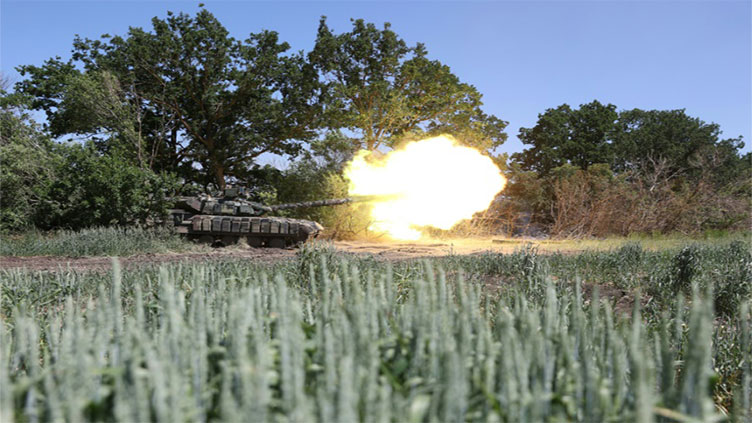 Ukraine tried to push back Russian troops in the east and south on Friday.

MYKOLAIV (AFP) - Ukraine tried to push back Russian troops in the east and south on Friday as France offered to help ensure access to the port of Odessa and ease a global grain crisis.

The United Nations and Western countries meanwhile raised fresh concerns over death sentences handed by pro-Russian separatists to two Britons and a Moroccan who were captured while fighting for Ukraine.

Kyiv said Friday it had launched new air strikes on Russian positions in the captured southern region of Kherson, one of the first areas to be taken by Russia after the February 24 invasion.

And fierce fighting continued in the eastern Donbas region, where Moscow has concentrated its firepower, especially around the eastern industrial city of Severodonetsk.

Local governor Sergiy Gaiday said on Friday that Russian forces had destroyed a major sports centre, adding: "One of the symbols of Severodonetsk was destroyed. The Ice Palace burned down."

People in the town of Lysychansk, located just across a river from Severodonetsk, spoke to AFP about their stark choices: stay and brave the shelling, or flee and abandon their homes.

Yevhen Zhyryada, 39, said the only way to access water was by heading to a water distribution site in the town.

"We have to go there under shelling, and under fire," he said. "This is how we survive."

With the world still facing shockwaves from the war, an adviser to French President Emmanuel Macron said France was ready to assist in an operation to allow safe access to Ukraine s Black Sea port of Odessa.

The port has been subject to a de facto blockade by Russia, and grain is waiting to be exported amid mounting fears of global food shortages, especially in developing countries.

"We are at the disposal of the parties to put in place an operation which would allow access in complete safety to the port of Odessa, in other words for boats to pass through despite the fact that the sea is mined," said Macron s advisor, who asked not to be named.

Macron will travel to Ukraine s neighbours Moldova and Romania next week -- but no date had been set for him to visit Kyiv, the advisor said.

France wants "victory for Ukraine", the advisor added, after Macron sparked controversy by suggesting Russia should not be humiliated.

Russia s invasion has put European countries on edge, and nine of them urged NATO on Friday to beef up its eastern flank.

The meeting of the leaders of Bulgaria, the Czech Republic, Estonia, Hungary, Latvia, Lithuania, Poland, Romania and Slovakia was held in the Romanian capital Bucharest less than three weeks ahead of a NATO summit meeting in Madrid.

"In view of the increased security risks in Romania and the Black Sea, consolidating NATO on its eastern flank... becomes all the more urgent and crucial," said Romanian President Klaus Iohannis.

Western countries reacted with fresh outrage after the separatist authorities in the Donetsk region of the Donbas on Thursday ordered the death penalty for Britons Aiden Aslin and Shaun Pinner, and Saadun Brahim of Morocco.

The United Nations warned that unfair trials of prisoners of war amounted to war crimes.

"Words turn into actions. That s the difference between Ukraine s relationship with Great Britain and other countries," Zelensky said in a video statement. "Weapons, finance, sanctions -- on these three issues, Britain shows leadership."

Kyiv has been critical of countries including Germany and France for the slow delivery of aid and for giving too much credence to negotiations with Russia s President Vladimir Putin.

-  Take back and strengthen  -

Russia has repeatedly cautioned the West against getting involved, with some officials warning of the risk of nuclear war.

The world s chemical weapons watchdog said Friday it was keeping a close eye on Ukraine to monitor "threats of use of toxic chemicals as weapons".

Putin has said that what Russia calls its special military operation is meant to "de-Nazify" Ukraine and suggested he is merely taking territory back.

Speaking to British university students via video link, Zelensky said Friday that Russia s claim Ukraine was "artificially created" was as preposterous as stating Ukrainians were "not humans but a variety of plants or a species of animals."