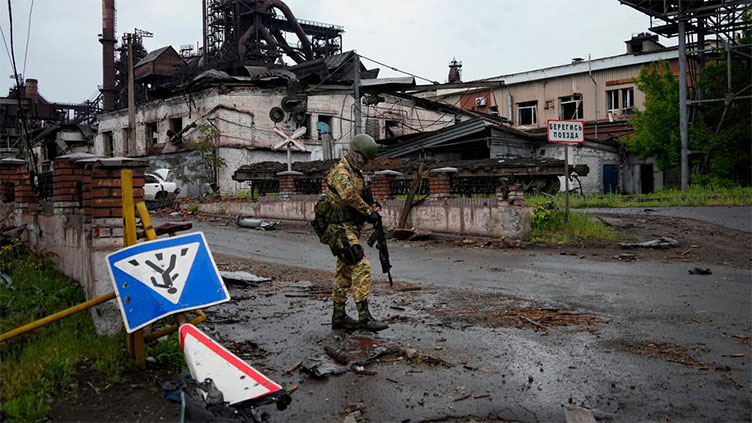 KYIV (AFP) - Russia claimed Tuesday that its forces had taken full control of residential neighbourhoods in eastern Ukraine s Severodonetsk, after Kyiv said its outnumbered troops were fighting on in the key eastern hub.

The brutal weeks-long contest for the key city in the Lugansk region continued to grind on, with civilians fleeing and some 800 taking refuge in a chemical factory.

"The residential areas of the city of Severodonetsk have been fully liberated," Russian Defence Minister Sergei Shoigu said.

The Russian army was still seeking to establish control over the city s "industrial zone and the nearest settlements," he added.

The war s impact continued to reverberate with the World Bank cutting its global growth estimate to 2.9 percent, 1.2 percentage points below the January forecast, due largely to Russia s invasion of Ukraine.

The toxic combination of weak growth and rising prices could trigger widespread suffering in dozens of poorer countries still struggling to recover from the upheaval of the Covid-19 pandemic, the bank said.

"For many countries recession will be hard to avoid," Malpass said.

The bank additionally announced $1.5 billion more in aid for Ukraine, bringing the total planned support package to more than $4 billion.

Amid the stark warnings of global food shortages partly blamed on the war, Russian Foreign Minister Sergei Lavrov arrived in Turkey to discuss "security corridors" for Ukrainian grain to leave the country.

A Russian naval blockade has prevented Ukraine, one of the world s top grain exporters, of shipping wheat and other products, forcing prices sharply higher.

"Right now we have about 20-25 million tonnes blocked. In the autumn that could be 70-75 million tonnes," Ukraine President Volodymyr Zelensky said Monday.

"But they (Ukrainians) have a dilemma about security and export," he was quoted as saying. "Both Russia and Ukraine trust us."

The Ukrainian Ministry of Foreign Affairs said in a statement it "appreciates Turkey s efforts aimed at unblocking Ukrainian ports."

However, "We reject any agreement that does not take into consideration the interests of Ukraine", it added, underlining Kyiv s wish for Western countries to take an active role in escorting grain convoys heading out of Ukrainian ports into the Black Sea.

Meanwhile along the war s main front in Donbas, there appeared to be no letup in the heavy shelling.

"The frontline situation in Ukraine has not changed significantly over the past 24 hours", Zelensky said, adding that the "defense of Donbas continues".

Moscow has been pushing for control of Severodonetsk as part of its bid to conquer a vast swathe of eastern Ukraine, but Kyiv s forces have so far managed to hold out.

Ukrainian sources noted the overwhelming superiority of Russian artillery in the area.

Zelensky has warned Ukrainian forces in the city were outnumbered and the Russians "are stronger", as fierce street fighting raged.

"These 800 civilians include around 200 out of the plant s 3,000 employees and approximately 600 inhabitants of the city of Severodonetsk," Davis said.

The Ukrainian army said Tuesday that Russian troops were also preparing to attack the key city of Sloviansk, about 65 kilometers (40 miles) west of Severodonetsk.

Its capture would open up the route to Kramatorsk, the main city of the Ukrainian-held part of the Donetsk region.

The leader of Ukraine s pro-Russian separatists in Donetsk, Denis Pushilin, on Tuesday confirmed the death of another Russian general in the fighting.

Pushilin expressed on Telegram his "sincere condolences to the family and friends" of Major General Roman Kutuzov, "who showed by example how to serve the fatherland".

Ukraine s forces have claimed to have killed several of Russia s top brass but their exact number is not known as Moscow is tight-lipped on losses.