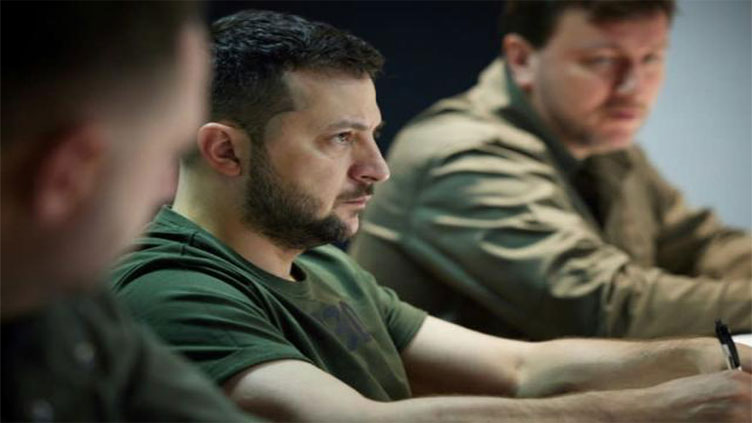 The Russian and Ukrainian forces battled for control of the eastern city of Severodonetsk.

KYIV (AFP) - Ukrainian President Volodymyr Zelensky warned Monday that his troops were outnumbered by a "stronger" Russian side, as the two countries  forces battled for control of the eastern city of Severodonetsk.

"We re holding out" in the key city, but "there are more of them and they are stronger," Zelensky told journalists in Kyiv, one day after a daring visit to frontline positions in Lysychansk, which sits across the Siverskyi Donets river from Severodonetsk.

Zelensky, along with US Secretary of State Antony Blinken, also warned Monday of tightening supplies of grain on the global market due to what Blinken said was a Russian strategy of "blackmail".

"There is somewhere around 20 million tonnes of wheat that is trapped in silos near Odessa, and in ships literally filled with grain that are stuck in the Odessa port because of this Russian blockade," said Blinken.

Rhetoric has spiked on both sides of the war, now in its fourth month, as Britain followed the United States in announcing it would supply longer-range, mobile missile launchers to Ukraine s forces, which could improve Kyiv s fight against Russian firepower.

The British Defense Ministry said it would be supplying track-mounted M270 multiple rocket artillery units, which can strike targets up to 80 kilometres (50 miles) away with precision-guided rockets, double what more standard battlefield artillery can reach.

The announcement came after Putin had warned that Moscow will hit new targets in Ukraine if the West supplies Kyiv with such weapons -- but did not specify which targets.

Fighting and heavy artillery strikes remained focused on the Donbas front and especially in Severodonetsk, the largest city of the Lugansk Oblast still not under Russian control.

In Lysychansk, pensioner Oleksandr Lyakhovets said he had just enough time to save his cat before flames engulfed his flat after it was hit by a Russian missile.

Russian forces pressed their offensive on several other fronts in the east of Ukraine, with Kyiv saying it had repulsed seven attacks around Donetsk and Lugansk.

The Russian defence ministry said its aircraft had hit three arms depots and a fuel storage facility near the village of Kodema, in the Donetsk region.

Both sides have gained and lost ground in recent days in Severodonetsk. Analysts say Ukrainian forces, in holding key areas of the city while attacking on other parts of the front lines, have highlighted weaknesses in Russia s capacity to push forward.

"The ability of Ukrainian forces to successfully counterattack in Severodonetsk, the Kremlin s current priority area of operations, further indicates the declining combat power of Russian forces in Ukraine," said the US-based Institute for the Study of War.

On Monday, Lavrov hit out at European countries that prevented his plane passing through their airspace, forcing him to cancel a visit to ally Belgrade.

"The unthinkable has happened... This was a deprivation of a sovereign state of the right to carry out foreign policy," Lavrov told journalists in Moscow.

Global concern over food supplies mounted as the Russian blockade on the port city of Odessa continued.

"Right now we have about 20 to 25 million tonnes blocked. In the autumn that could be 70 to 75 million tonnes," said Zelensky, whose country was the world s fourth biggest grain exporter before the war.

In Washington, Blinken said Russia had exacerbated the grain crisis by "hoarding" its own grain, preventing it from being exported.

At the same time, Blinken called "credible" reports that Russia was exporting grain stolen from Ukraine.