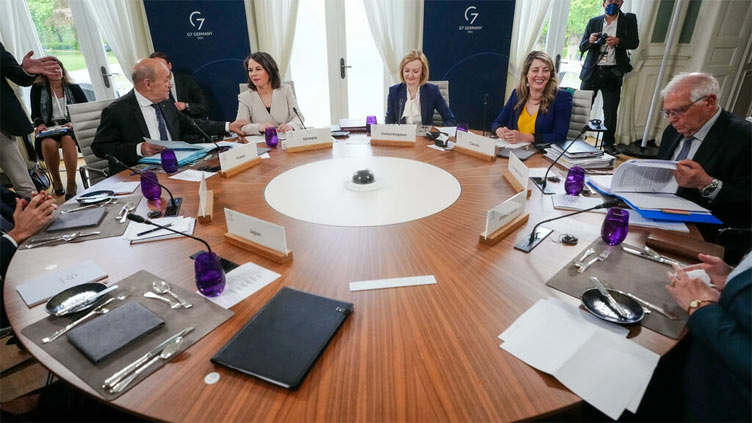 GERMANY (AFP) – Leading democracies on Friday pledged unwavering support for Ukraine in its war with Russia while the European Union promised to hike military support for Kyiv by more than half a billion dollars.

Foreign ministers of the Group of Seven (G7) met on the second day of a three-day meeting in the Germany resort of Wangels, joined by their counterparts from Ukraine and Moldova.

French Foreign Minister Jean-Yves Le Drian said the G7 were "very strongly united" in their will to "continue in the long term to support Ukraine s fight for its sovereignty until Ukraine s victory."

The cash will raise the EU s total military aid for Ukraine to two billion euros, he said.

"The recipe is clear –- more of the same," Borrell said.

"More pressure on Russia, with economic sanctions. Continue working on international isolation of Russia. Countering the disinformation about the consequences of the war... And presenting a united front to continue supporting Ukraine."

"It is very important at this time that we keep up the pressure on Vladimir Putin by supplying more weapons to Ukraine, by increasing the sanctions," she said.

They were joined on Friday by their Ukrainian counterpart Dmytro Kuleba, who praised their resolve to help Kyiv but also urged them to go further.

"Today I asked G7 countries to adopt legislation and put in place all necessary procedures needed to seize Russian sovereign assets and give them to Ukraine to use this money to rebuild our country," he said.

Kuleba also urged the EU to ensure that an embargo is placed on Russian oil, warning that an omission of the ban on the bloc s next package would mean its unity was "broken".

The war in Ukraine had led to greater unity among Western allies, the minister said.

"It is Ukraine who made the G7 strong again. It is our struggle that brought back confidence in the G7 to lead, to shape international affairs and to counter attempts of authoritarian regimes to defeat democracy," he said.

The ministers were also joined by Moldovan Foreign Minister Nicu Popescu, whose country is facing a huge influx of refugees from Ukraine.

Separately in the southwestern German city of Stuttgart, agriculture ministers of the G7 as well as their Ukrainian counterpart gathered on Friday to discuss how to head off a looming international food crisis sparked by the war.

Accusing Russia of theft from Ukrainian farmers, Germany s agriculture minister Cem Oezdemir said this was "an especially repugnant form of war that Russia is leading, in that it is stealing, robbing, taking for itself grain from eastern Ukraine."

Russia invaded Ukraine on February 24 but Ukrainian forces managed to push Moscow s forces back from Kyiv, and the conflict is now well into its third month.

Western countries have supplied Ukraine with weapons, including artillery, anti-aircraft missiles, anti-tank weapons and other powerful material, but Kyiv has been pushing allies for more support.

Le Drian pointed to the global effects of what he called a "lasting conflict... particularly in the area of food security".

German Foreign Minister Annalena Baerbock had also on Thursday highlighted the growing impact of the war on poorer countries.

"We as the strongest industrialised democracies have a special responsibility" to help poorer nations weather the food and energy squeezes caused by the war, she said.