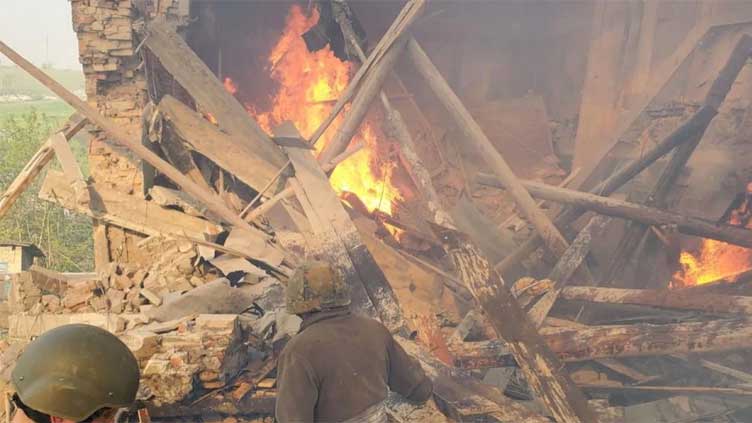 UKRAINE (Reuters) - As many as 60 people were feared to have been killed in the Russian bombing of a village school in the eastern Ukrainian region of Luhansk, the regional governor said on Sunday.

Governor Serhiy Gaidai said Russian forces dropped a bomb on Saturday afternoon on the school in Bilohorivka where about 90 people were sheltering, causing a fire that engulfed the building.

"The fire was extinguished after nearly four hours, then the rubble was cleared, and, unfortunately, the bodies of two people were found," Gaidai wrote on the Telegram messaging app.

Reuters could not immediately verify the report.

Ukraine and its Western allies have accused Russian forces of targeting civilians in the war, which Moscow denies.

In the ruined southeastern port city of Mariupol, scores of civilians have been evacuated from a sprawling steel plant in a week-long operation brokered by the United Nations and the International Committee of the Red Cross (ICRC).

Ukrainian President Volodymyr Zelenskiy said in an address late on Saturday that more than 300 civilians had been rescued from the Azovstal steelworks and authorities would now focus on trying to evacuate the wounded and medics. Other Ukrainian sources have cited different figures.

The Azovstal plant is a last hold-out for Ukrainian forces in a city now largely controlled by Russia, and many civilians had also taken refuges in its underground shelters. It has become a symbol of resistance to the Russian effort to capture swathes of eastern and southern Ukraine.

Russian-backed separatists said on Sunday a total of 182 civilians evacuated from the plant had arrived at a temporary accommodation point in Bezimenne, in the area they control. Those who wished to go to areas controlled by Ukraine were handed over to U.N. and ICRC representatives, they said.

In the Ukrainian-controlled city of Zaporizhzhia, about 230 km (140 miles) northwest of Mariupol, dozens of people who had fled the port city and nearby occupied areas on their own or with the help of volunteers waited to be registered in a car park set up to welcome evacuees.

"There s lots of people still in Mariupol, who want to leave but can t," said history teacher Viktoria Andreyeva, 46, who said she had only just reached Zaporizhzhia after leaving her bombed home in Mariupol with her family in mid-April.

"The air feels different here, free," she said in a tent where volunteers offered food, basic supplies and toys to the new arrivals, many of whom were traveling with small children.