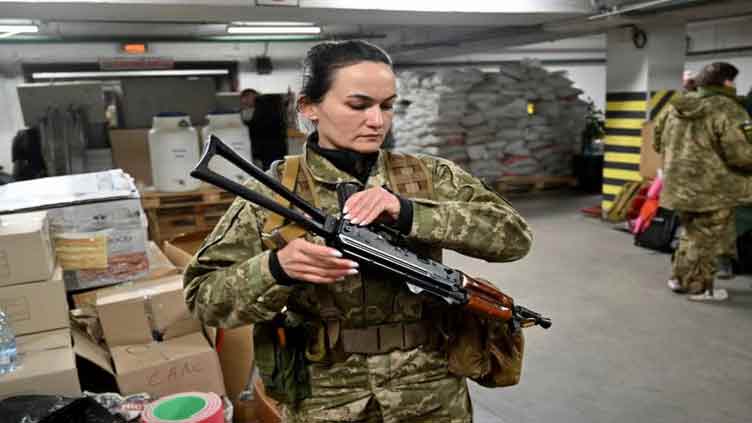 WASHINGTON (AFP) - Washington and its allies moved Friday to end normal trade relations with Russia, as President Joe Biden vowed the West would make Vladimir Putin "pay the price" for his invasion of Ukraine.

Biden announced the new step, which would enable Western nations to inflict steep tariff hikes on Moscow, in coordination with NATO allies, the Group of Seven and the European Union.

On the US side, lawmakers -- who would have the final say -- have already indicated they support the step, which involves stripping Russia of the preferential status that ensures equal treatment between international trade partners.

Warning in a speech at the White House that "Putin must pay the price" as the "aggressor" in its ex-Soviet neighbor, Biden said the US move would be mirrored by similar steps in allied nations.

And in a statement issued in Berlin, G7 leaders confirmed they would each "endeavor" to take action to deny Russia favored trade status.

"The United States and our allies and partners continue in lockstep to ramp up the economic pressures on Putin and to further isolate Russia on the global stage," Biden said.

"He cannot pursue a war that threatens the very foundation of international peace and stability and then ask for help from the international community."

A key principle of the World Trade Organization, the so-called favored status known in the United States as permanent normal trade relations (PNTR) requires member countries to guarantee one another equal tariff and regulatory treatment.

Accorded by the United States to most countries in the world, with notable exceptions like Cuba and North Korea, the status grants imported goods from a country equal footing with other trading partners.

Stripping Moscow of the designation, granted in December 2012, would allow Biden to impose steep tariffs on Russian goods or restrict imports of some products.

The president also announced a ban on imports of Russian vodka, diamonds and seafood into the United States, while the Commerce Department said it would stop exports of American luxury goods to Russia and Belarus, which supported the invasion.

The new trade sanction would cap several rounds of measures intended to sever Russia s economic and financial ties with the rest of the world over its invasion of the ex-Soviet nation.

They have included banning Russian oil imports, seizing the assets of billionaires tied to President Vladimir Putin, and freezing the nation s stockpile of cash.

Together, the moves have already pushed Moscow to the brink of a debt default.

Those steps have also caused prices for key commodities, like gasoline and wheat, to soar, harming US consumers already facing the highest inflation in four decades.

And trade experts are dubious about whether new tariffs would be effective.

"US direct trade with Russia is relatively small, so higher tariffs would not do much damage to them but could raise costs for our manufacturers who rely on them for key raw materials," said William Reinsch of the Center for Strategic and International Studies in Washington.

"The additional damage this does to the trading system, while not immediate, could be significant," he said in an analysis.

The United States imported just under $30 billion in goods from Russia last year, including $17.5 billion in crude oil.

The IMF said Thursday that war and the sanctions will lead to a "sharp contraction" of the Russian economy, and slower global growth.

The Washington-based crisis lender this week approved $1.4 billion in fast-disbursing aid for Ukraine, and the World Bank also released nearly $500 million of what is expected to be a $3 billion financing package to aid the war-wracked country.

US lawmakers meanwhile passed a huge spending bill on Thursday, including almost $14 billion in humanitarian and military aid for Kyiv as the Russian invasion entered its third week.

The $13.6 billion relief package is more than double what the Biden administration initially requested, and includes aid for refugees, the military and support for NATO allies in eastern Europe.