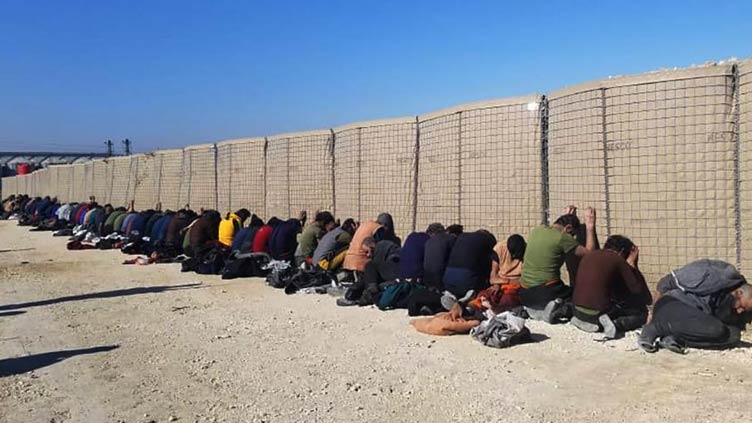 Fighting broke out Thursday night when IS unleashed its biggest attack in Syria since the fall of its “caliphate” three years ago. More than 100 militants assaulted the main prison holding suspected extremists in the northeastern city of Hassakeh, sparking a battle with U.S.-backed Kurdish fighters that has so far left dozens dead.

Despite their defeat in Syria nearly three years ago, IS sleeper cells have carried out deadly attacks against U.S.-backed fighters of the Kurdish-led Syrian Democratic Forces as well as government forces on the west bank of the Tigris River in eastern Syria.

The group’s territorial control in Syria and Iraq, where they once declared their “caliphate” was crushed by a years-long U.S.-backed campaign. But its fighters continued with sleeper cells that have increasingly killed scores of Iraqis and Syrians in past months.

The U.S.-backed Kurdish-led Syrian Democratic Forces brought more reinforcements into Hassakeh in an attempt to regain control of areas taken by IS, residents said. More civilians fled the areas of fighting as sounds of explosions echoed in the city and black smoke billowed from the Gweiran Prison area on the southern edge of Hassakeh.

Hassakeh Gov. Ghassan Khalil told Syrian state media that some 4,000 civilians have fled to areas controlled by Syrian government forces in the city and its suburbs.

The IS attack targeted Gweiran Prison, the largest of around a dozen facilities run by U.S.-backed Syrian Kurdish forces holding suspected IS fighters. Gweiran holds some 5,000, including IS commanders and figures considered among the most dangerous.

“The battles are taking place on the edge of the prison,” SDF spokesman Siamand Ali told The Associated Press, adding that most of the prison is under their control apart from a small part that is held by rioting prisoners. He added that fighting is also ongoing in the nearby Zuhour neighborhood, where IS fighters were holed up.

Ali said SDF fighters and U.S.-led coalition aircraft targeted a technical academy building where dozens of “Daesh terrorists took positions.” Ali, who used an Arabic acronym to refer to IS, said SDF fighters are advancing slowly in order to protect the lives of civilians as IS gunmen are holed up in alleys and in residential homes.

Ali said some 45 IS gunmen were killed in the fighting, adding that a statement will be issued later about the casualties among SDF fighters.

The Britain-based Syrian Observatory for Human Rights, an opposition war monitor, said that since Thursday night, 78 people have been killed, including 45 IS gunmen, 28 Kurdish fighters and five civilians. The Observatory added that SDF fighters were using loud speakers to call on IS fighters to surrender but the extremists refused.