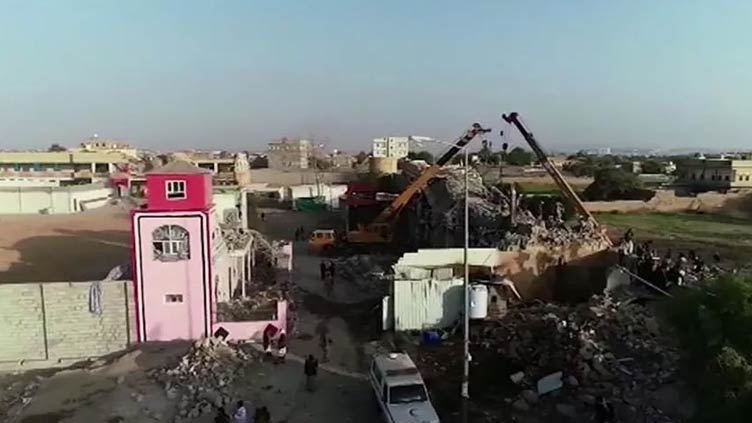 SAADA (AFP) - The Saudi-led coalition on Saturday denied carrying out an air strike on a prison in Yemen s rebel-held north that aid groups said killed at least 70 people, including migrants, women and children.

Claims the military coalition ordered the raid, which reduced buildings to rubble and left rescuers scrabbling for survivors with their bare hands, were "groundless", the alliance said.

The attack, which coincided with a coalition strike on the Yemeni port of Hodeida that killed three children and knocked out the impoverished country s internet, was condemned by the United Nations secretary-general.

But "these claims adopted by the militia are baseless and unfounded", said coalition spokesperson Turki al-Malki, referring to the Iran-backed Huthi insurgents.

This week has witnessed a dramatic upswing in the conflict that has already killed tens of thousands of people and displaced millions, creating what the UN calls the world s worst humanitarian crisis.

The rebels seized the capital Sanaa in 2014, prompting the Saudi-led intervention -- supported by the US, France and Britain -- in March 2015. It was intended to last just a few weeks.

The Huthis took the war into a new phase by claiming the drone and missile attack that killed three people, the first deadly assault the UAE has acknowledged inside its borders and prompting threats of reprisals.

The internet blackout, which went into its second day on Saturday according to web monitor NetBlocks, complicated rescue work and media reporting as information slowed to a trickle.

Unverified footage released by the Huthis revealed gruesome scenes at the bombed-out prison facility, as rescue workers scrabbled to dig out bodies and mangled corpses were placed in piles.

Eight aid agencies operating in Yemen said in a joint statement that the prison in Saada, the rebels  home base, was used as a holding centre for migrants, who made up many of the casualties.

They said they were "horrified by the news that more than 70 people, including migrants, women and children, have been killed... in a blatant disregard for civilian lives".

Hospitals were overwhelmed as hundreds of casualties flooded in, aid workers said.

"It is impossible to know how many people have been killed. It seems to have been a horrific act of violence," said Ahmed Mahat, Doctors Without Borders  head of mission in Yemen.

In a later statement, the UN chief Antonio Guterres "reminds all parties that attacks directed against civilians and civilian infrastructure are prohibited by international humanitarian law".

-  Destruction of the country  -

US Secretary of State Antony Blinken called for "all parties to the conflict to de-escalate" and "abide by their obligations under international humanitarian law".

Iran on Saturday also condemned recent air strikes on Huthi-held areas, warning they have "made the path to achieve a just peace in the country even more difficult," foreign ministry spokesman Saeed Khatibzadeh said.

Khatibzadeh said there was a lack of "serious determination to advance the political settlement of the Yemeni crisis", warning it would lead to the "destruction of the country and instability in the region."

The Huthis have warned foreign companies to leave the "unsafe" UAE, a veiled threat of revenge attacks after Friday s strikes.

"We advise the foreign companies in Emirates to leave because they invest in an unsafe country and the rulers of this country continue in their aggression against Yemen," warned Huthi military spokesperson Yahya Saree.