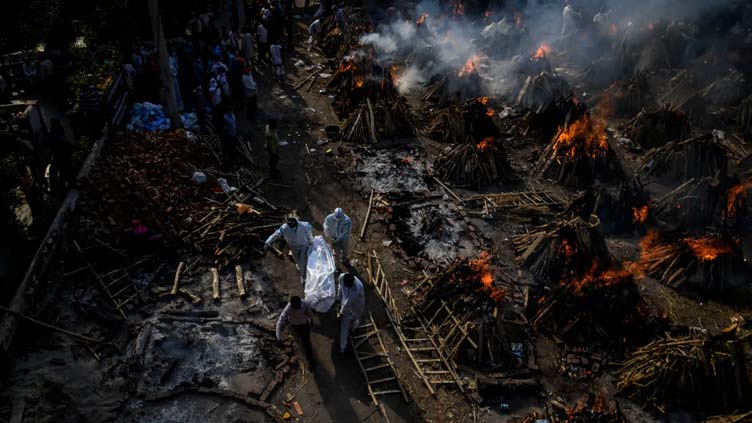 Case numbers have yet to match the enormous figures seen last spring.

NEW DELHI (AFP) - Haunted by the spectre of last year’s crisis, India is bracing for a deluge of Covid-19 cases, with authorities of various megacities bringing in restrictions in a bid to keep infections in check.

Case numbers have yet to match the enormous figures seen last spring, when thousands died each day and the Hindu holy city of Varanasi maintained round-the-clock funeral pyres for the mass cremation of virus victims.

But daily infections nearly tripled over two days this week to more than 90,000, a surge driven by the highly contagious Omicron variant that some experts worry could again see the country’s hospitals overwhelmed.

An overnight curfew has been imposed in the Delhi area that includes the capital, where weekend movement restrictions will begin on Friday evening, with all non-essential workers asked to stay home.

"Even a small percentage of a large number of cases translates to a large number in absolute terms," Gautam Menon, a professor at India’s Ashoka University who has worked on Covid infection modelling, told AFP.

"This could potentially stress out health care systems to levels comparable to or worse than the second wave."

Doctors and nurses who spoke to AFP have so far been optimistic, with fewer severe cases among those patients admitted to hospital -- and with the benefit of experience.

"Last year, we didn’t know what exactly we were dealing with. I think now, mentally, it’s a little better," one frontline worker at a Delhi hospital said.

Suresh Kumar, director of Lok Nayak Jai Prakash Hospital in the capital, where cases have quadrupled from a handful at the start of the week to 20, said the rise was "not a cause for panic".

But local officials have watched the sharply rising case numbers with alarm and some of India’s biggest urban centres have moved to impose restrictions again.

Earlier virus lockdowns were a hammer blow to the Indian economy and many are worried about the financial impact of new restrictions.

"I will be working only for 15 days this month," said Delhi resident Tumul Srivastava, whose office is subject to the 50 percent occupancy limits imposed by the city.

"My salary may be deducted. All this is adding to my anxiety."

India appears better placed to weather Omicron than it was ahead of the calamitous Delta wave it suffered last spring, when more than 200,000 people died in a matter of weeks.

Back then, hospitals ran out of oxygen and patients desperately scrambled to source medicine after a run on pharmacies.

That campaign, combined with last year’s Delta sweep of towns and villages around the country, may help lessen the impact of the latest spread.

"Though we do not have data, this may give strong hybrid immunity against severe outcomes," University of Michigan epidemiologist Bhramar Mukherjee told AFP.

Preliminary studies have so far suggested the Omicron variant has led to less severe health consequences among those infected, despite its rapid spread.

Mukherjee warned however that an uncontrolled spread of new infections could still pose serious problems for India, even if the direct virus toll is a fraction of that seen last year.

"As you are witnessing in the US and UK, a major chunk of the working population being sick is affecting the societal infrastructure and leading to chaos," she said.

"I am afraid there may be a period in India when we see the same thing -- just the sheer volume may make the system crumble."