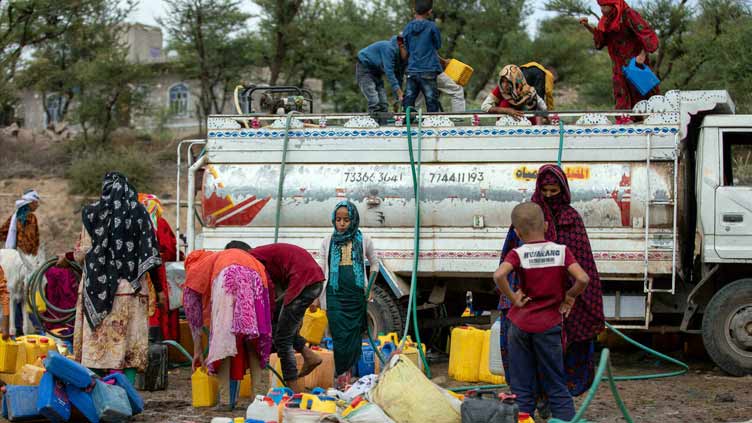 Yemen has been devastated by a civil war

SANAA (AFP) - The World Food Programme said Wednesday it was "forced" to cut aid to Yemen due to lack of funds, and warned of a surge in hunger in the war-torn country.

"From January, eight million will receive a reduced food ration, while five million at immediate risk of slipping into famine conditions will remain on a full ration," the United Nations agency said in a statement, adding that it was "running out of funds".

Yemen has been devastated by a civil war between the Saudi-backed government and Iran-backed Huthi rebels since 2014, and millions of civilians are on the brink of famine.

The fighting has killed tens of thousands, displaced millions and left some 80 percent of Yemenis dependent on aid.

"Every time we reduce the amount of food, we know that more people who are already hungry and food insecure will join the ranks of the millions who are starving," said WFP Middle East and North Africa director Corinne Fleischer, according to the statement.

"But desperate times call for desperate measures and we have to stretch our limited resources and prioritise, focusing on people who are in the most critical state."

WFP said that it needs $813 million to continue to help the most vulnerable in Yemen through May and $1.97 billion during 2022 to continue to deliver food assistance to families on the brink of famine.

The UN warned in March of a "death sentence" against Yemen after a donor conference yielded less than half the funds needed to prevent famine.

It had appealed for $3.85 billion to pay for urgently needed aid, but just $1.7 billion was offered at a virtual pledging conference co-hosted by Sweden and Switzerland.

Shrinking humanitarian budgets last year forced the closure of many programmes, including health services and food distribution, heaping hardship on a country the UN has said is already witnessing the world’s worst humanitarian crisis.

According to the latest UN figures, more than 16 million Yemenis, about half the approximately 30-million population, will face hunger this year. Nearly 50,000 are already starving to death in famine-like conditions.

The WFP’s announcement on Wednesday comes as UN aid flights into Yemen’s rebel-held capital Sanaa have been halted following air strikes by the Saudi-led coalition supporting the government.

Flights into Sanaa airport have largely ceased, but there have been exemptions for aid flights that are a lifeline for the population.

"The Yemeni people are now more vulnerable than ever, reeling from relentless conflict and the deepening economic crisis that has pushed millions into destitution," said Fleischer.

"WFP food stocks in Yemen are running dangerously low at a time when budgets for humanitarian crises around the world are stretched to the limit.

"We desperately need donors, who were so generous in the past, to work with us to avoid this looming hunger catastrophe."