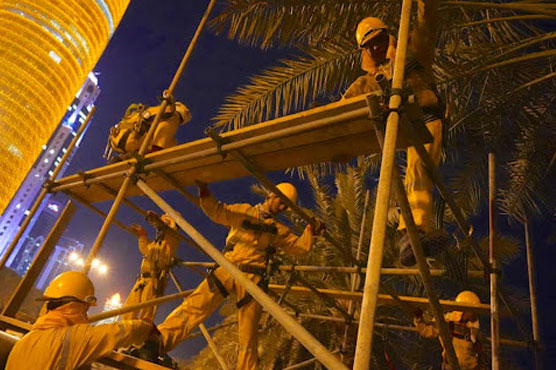 The report comes amid criticism of working conditions for hundreds of thousands of migrant labourers -- including those who built the stadiums for the World Cup.

The ILO report, entitled "One is too many", said that the top cause of fatalities were falls -- with most happening at the workplace.

Qatar, which has made a series of labour reforms since being selected to host the football tournament, welcomed the report saying it "highly values" its collaboration with the ILO.

"Thirty (deaths) occurred pre-hospital and 20 occurred in hospital," it added, which ILO says is the most comprehensive picture ever of work-related deaths in the country.

The ILO said that there were 506 recorded severe injuries -- an average of 42 a month -- with 37,600 people suffering mild to moderate injuries.

Most of those injured came from Bangladesh, India and Nepal, and worked mainly in the construction industry.

The report said it also identified gaps in data collection.

"It’s not collected in a systematic way," said Max Tunon, head of the ILO project office in Qatar, with the report calling for a "national integrated platform" to collate injury data.

"Another key recommendation is to better investigate death that hadn’t been categorised as work-related -- but could be work-related," Tunon said.

Qatar welcomed the report, saying it reflected its commitment to transparency on labour rights, and was reviewing the recommendations.

"Qatar... will continue working with the ILO to ensure that labour reforms are implemented effectively, and that Qatar is continuously improving labour practices and increasing safety for all workers," a government statement read.

Qatar has issued a string of reforms to its employment regulations since being selected to host the World Cup, including introducing a $275 monthly minimum wage and simplifying the process for changing employers.

More than two million foreigners work in Qatar, many employed directly or indirectly on vast infrastructure projects for the World Cup.