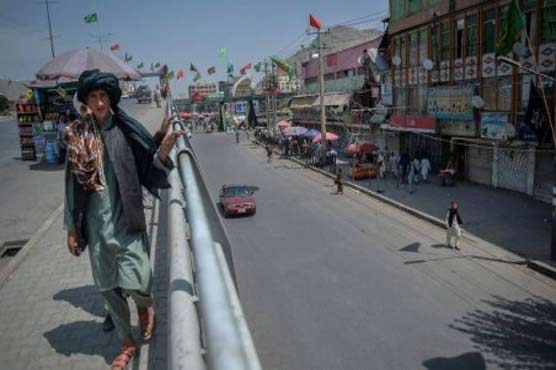 DUSHANBE (AFP) - Loud, patriotic music at recent independence day celebrations in the capital of Tajikistan was of little solace to Abdulbashir Yusufi, still reeling from the Taliban’s takeover of his country, neighbouring Afghanistan.

Yusufi escaped to the mountainous Central Asian country on Afghanistan’s doorstep last month, securing last-minute visas and flights for his family, just as the Taliban arrived at the gates of Kabul.

As the high-tempo music played in a central square of Dushanbe, the 43-year-old explained that his friends and relatives faced death at the hands of the Taliban in Panjshir, the last province to fall to the group.

"I’m so worried for them," Yusufi, a former resident of the northern city Mazar-e-Sharif, told AFP.

A doctor who worked with the German army and a British pharmaceutical firm before that, Yusufi says he cannot contemplate a return home with his family.

"If we go back to Afghanistan there is a threat to our lives," he explained.

Rather than remain in Tajikistan, Yusufi is hoping to be granted refuge in the West.

The Taliban’s rapid sweep of Afghanistan as foreign troops drew down after 20 years sparked a frenzied exodus -- particularly among Afghans who worked alongside foreign militaries -- that centred on the airport in Kabul.

Tajikistan, a secretive and authoritarian ex-Soviet state close to Russia and China, has not provided figures for the number of Afghans who have arrived there since the Taliban began its takeover in May.

But Interior Minister Ramazon Hamro Rahimzoda said earlier this month that the country could not admit around 80 Afghan families camping out on its border with Afghanistan, saying it lacked the infrastructure to house them.

Tajik leader Emomali Rakhmon then criticised international institutions for their "indifference" to the fate of Afghans, but he made no commitments to house refugees in his own country.

For Afghans who have made it to Tajikistan, the government’s notable anti-Taliban positioning might be a good sign.

While other neighbouring countries, like Uzbekistan, began developing ties with the Taliban long ago, Tajik authorities have repeatedly criticised the group and refused to engage with it.

Strongman Rakhmon has complained of the build-up of "terrorist groups" on Tajikistan’s southern border since the Taliban gained control of it.

In a news at the embassy building on Wednesday Aghbar dismissed the Taliban’s new government in Kabul as "several mullahs, some of whom have not even read two books".

He said he could not say how many Afghan refugees had arrived in Tajikistan in recent months but credited the government for "always treating refugees warmly".

Younger Afghan escapees observing Tajikistan’s independence day celebrations in central Dushanbe told AFP that they saw their long-term future outside Afghanistan and in the West.

Abdulbashir Yusufi’s daughter, Mahsa Yusufi, 15, said that she dreamed of living in the United States, Canada or the United Kingdom.

Abdusabbur Alizai, a 23-year-old student, said he planned to continue studying at the Tajik university at which he is enrolled.

"Then, I will try to leave for a country where I will be able to earn a good living," Alizai said.

Many of his relatives feel the same way, he told AFP.

"They used to have work. Now there isn’t any. They are all unhappy with the Taliban and all want to leave Afghanistan for a better life," Alizai said.