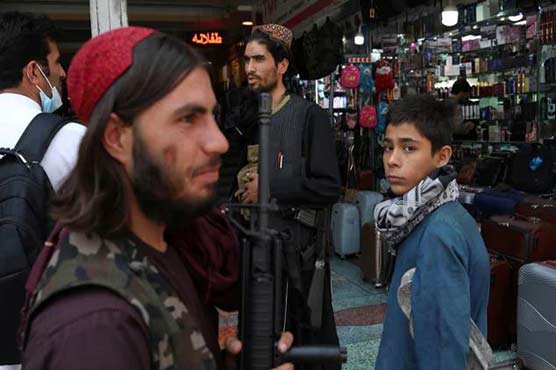 DOHA (AFP) - Qatar said the Taliban have demonstrated "pragmatism" and should be judged on their actions as the undisputed rulers of Afghanistan, but stopped short of announcing formal recognition of the Taliban.

Qatari Assistant Foreign Minister Lolwah al-Khater told AFP in an exclusive interview that it would be up to the Afghans to determine their future, not the international community.

Doha was the central intermediary between the Taliban, who opened a political office in Qatar in 2013, and the international community including Washington up until the group completed their lightning takeover of Afghanistan last month.

"They have shown a great deal of pragmatism. Let’s seize the opportunities there... and look at their public actions," said Khater, who stopped short of announcing formal recognition of Afghanistan’s new rulers.

"They are the de facto rulers, no question about that," she told AFP in the interview, which took place late Monday, before the Taliban unveiled their hardline interim government.

The Taliban named an acting government headed by Mullah Mohammad Hassan Akhund on Tuesday but have yet to receive formal recognition from any United Nations member state, including Qatar.

But Khater, Qatar’s spokeswoman on the world stage as well as face of the nation’s coronavirus response, noted "some good gestures" from the new Taliban rulers of Afghanistan.

"The very fact many evacuees were able to leave Kabul -- including many female students -- is a showcase, because without their cooperation, it would not have been possible," she told AFP.

Qatari recognition of the Taliban would not come immediately, Khater said.

"We don’t rush to a recognition. But we don’t completely disengage with the Taliban... we take the middle way."

For its part, the US said on Tuesday that it was "concerned" about the government unveiled by the Taliban earlier in the day, noting it was comprised solely of Taliban members and did not include any women.

A State Department spokesman noted that it was a "caretaker" government and said "we will judge the Taliban by its actions, not words."

Qatar in the spotlight

Khater said that since returning to power, the Taliban had largely left Afghan health authorities, including female medics, free to continue their coronavirus response.

Calls from Western countries and NGOs for the group to respect the rights of women and minorities have mounted in the days since their shock August 15 takeover of Kabul.

"Afghanistan is a sovereign country... the people of Afghanistan should have their own say," said Khater.

Qatar, a US ally that has emerged as a key player both in evacuations and diplomacy on Afghanistan, is host to the largest US airbase in the region.

Nearly half of the more than 120,000 people airlifted out of Afghanistan have transited through Qatar, which is also working on the ground to allow Kabul airport, barely operative following Washington’s withdrawal, to reopen.

It was the deal struck between former president Donald Trump’s administration and the Taliban in Doha in February last year that set the course for Washington’s chaotic withdrawal and the militants’ subsequent takeover.

On and off talks between the Afghan government and Taliban in Doha that followed the deal failed to deliver a workable blueprint for an inclusive government.

Asked if Qatar’s actions had contributed to the Taliban’s re-emergence, Khater said: "Don’t kill the messenger".

"Qatar has been the messenger... we have been facilitating," she added.

Qatar has been thrust into the international spotlight after enabling one of history’s largest airlifts in response to the takeover.

Khater largely oversaw Doha’s evacuation operations and even received some refugees in person.

On a two-day visit to the fabulously wealthy Arabian desert nation, US Secretary of State Antony Blinken voiced appreciation to Qatar’s ruler, Emir Sheikh Tamim bin Hamad Al-Thani, in a public relations coup for the country.

Visits from a procession of top ministers and envoys, rounded off by Blinken, capped a whirlwind week of diplomacy on the world stage for Doha.

"Many people were questioning our mediation and approach, but now I think we are putting this to a real test and the entire world is looking at us to help and facilitate in this mediation," Khater said.

Despite the logistical challenges on the ground, the diplomat said she was hopeful aid efforts could resume, but said that UN agencies and their work should not be politicised.

"More engagement from the side of the UN in general would be helpful," she said.

"UN agencies shouldn’t be politicised. They should be focused on the humanitarian and developmental aid."