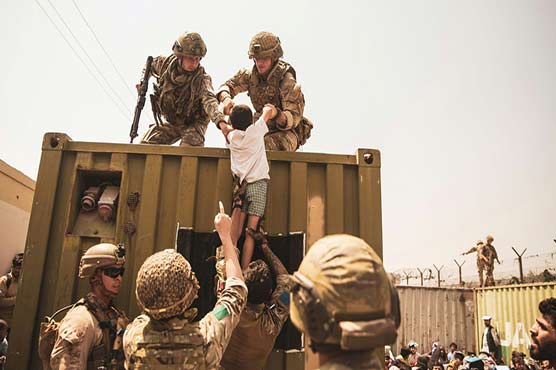 GENEVA (AFP) - Many children were separated from their families amidst the chaotic conditions in Afghanistan after the Taliban swept into power, and hundreds were evacuated unaccompanied from the country, the UN said Tuesday.

The UN children’s agency UNICEF said that it and its partners had registered around 300 unaccompanied and separated children evacuated from Afghanistan since August 14.

"We expect this number to rise through ongoing identification efforts," UNICEF chief Henrietta Fore said in a statement, voicing concern for their wellbeing and safety.

The agency said that many children had become separated from their families as tens of thousands of people flocked to Kabul airport in a desperate attempt to leave the country before US forces fully withdrew at the end of August.

The United States in the final days airlifted more than 123,000 people out of Kabul’s airport including US citizens and interpreters and others who supported the US mission and were eligible for a special visa to immigrate.

Some of the separated children had been evacuated on flights to Germany, Qatar and other countries, UNICEF said.

"I can only imagine how frightened these children must have been to suddenly find themselves without their families as the crisis at the airport unfolded or as they were whisked away on an evacuation flight," Fore said.

She pointed out that separated children are "among the most vulnerable children in the world."

"It is vital that they are quickly identified and kept safe during family tracing and reunification processes," she said, stressing that "all parties must prioritise the best interests of the child and protect children from abuse, neglect and violence."

UNICEF is currently providing technical support to governments who are hosting evacuated children, and are helping register those that are unaccompanied, trace their families and working to reunite them.

The UN agency stressed the importance of providing all separated or unaccompanied children with "safe, temporary alternative care" while those efforts are underway.

The children should preferably be placed with extended family members or in a family-based setting, while institutional care should be a last resort and only temporary, it said.

Fore urged all countries where these unaccompanied children may have family members to "facilitate reunification and safe, legal migration pathways for these children if it is in the child’s best interest."

Children who are travelling with trusted adults should also in most cases be permitted to remain with them, she said.