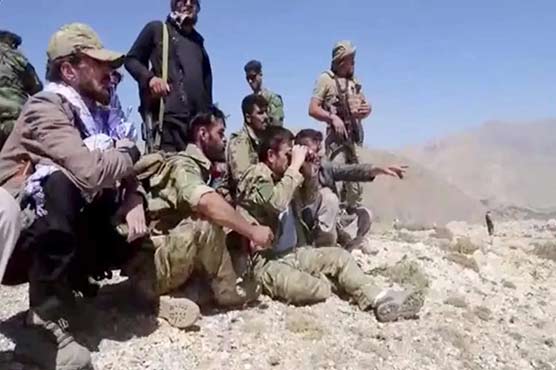 Italian aid agency Emergency, which runs a hospital in Panjshir, said Taliban forces had reached the village of Anabah, where they run a surgical centre.

"Many people have fled from local villages in recent days," Emergency said in a statement Saturday, adding it was continuing to provide medical services.

"There has so far been no interference with Emergency’s activities," it said.

"We have received a small number of wounded people at the Anabah Surgical Centre."

Anabah lies some 25 kilometres (15 miles) north inside the 115-km-long valley, but unconfirmed reports suggested the Taliban had seized other areas too.

Bill Roggio, managing editor of the US-based Long War Journal, said Sunday that there was still a "fog of war" with unconfirmed reports the Taliban had captured multiple districts -- but that "it looks bad".

Both sides claim to have inflicted heavy losses on each other.

"The Taliban army has been hardened with 20 years of war, and make no mistake, the Taliban trained an army," Roggio tweeted Sunday, adding that "the odds were long" for the Panjshir resistance.

"The Taliban army was injected with a massive amount of weapons and munitions after the US withdrawal and collapse of the ANA" (Afghan National Army), he added.

Fighters in Panjshir held out for a decade against the Soviet military and also the Taliban’s first regime from 1996-2001.

But former vice-president Amrullah Saleh, who is holed out in Panjshir alongside Ahmad Massoud -- the son of legendary anti-Taliban commander Ahmad Shah Massoud -- warned of a grim situation.

Saleh in a statement spoke of a "large-scale humanitarian crisis", with thousands "displaced by the Taliban onslaught".

Pro-Taliban social media have boasted of capturing swathes of the valley, but Nick Waters from the investigative website Bellingcat said the posts did not include verifiable photographs to back up the claims.

"It will be quite easy to verify a video showing Taliban within the Panjshir valley," Waters said.

The Panjshir Valley, surrounded by jagged snow-capped peaks, offers a natural defensive advantage, with fighters melting away in the face of advancing forces, then launching ambushes firing from the high tops down into the valley.