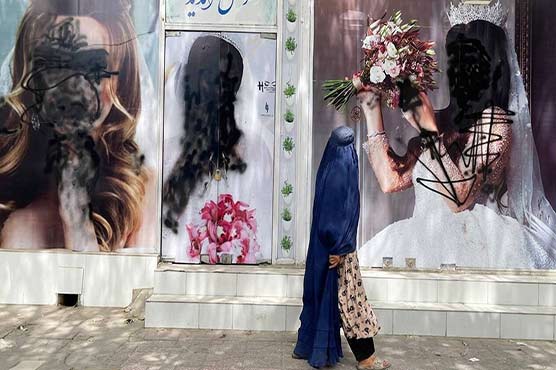 GENEVA (AFP) - The UN rights chief voiced grave concern Tuesday at the situation in Afghanistan after the Taliban swept into power, saying their treatment of women would mark a "fundamental red line".

Speaking before an emergency session on Afghanistan, Michelle Bachelet urged the Taliban to honour commitments to respect the rights of women and girls, and ethnic and religious minorities, and refrain from reprisals.

"The onus is now fully on the Taliban to translate these commitments into reality," she said.

"I strongly urge the Taliban to adopt norms of responsive governance and human rights, and to work to re-establish social cohesion and reconciliation, including through respect for the rights of all who have suffered during the decades of conflict," Bachelet told the council.

"A fundamental red line will be the Taliban’s treatment of women and girls," she said, urging "respect for their rights to liberty, freedom of movement, education, self expression and employment."

"In particular, ensuring access to quality secondary education for girls will be an essential indicator of commitment to human rights."

Tuesday’s meeting comes as US troops lead increasingly desperate efforts to airlift thousands of people out of Kabul after the Taliban warned evacuations could continue only for another week.

Crowds continue to mass outside the airport, with many Afghans terrified of facing life under the Taliban.

The militants have repeatedly promised a different kind of rule to their brutal regime of the 1990s that saw women confined to their homes, most entertainment banned, and punishments including stonings and public executions.

But their rebranding is being treated with scepticism amid reports that Taliban fighters have been going door-to-door in recent days searching for opponents -- including journalists.

Even before the Taliban takeover, the UN says Afghanistan saw a sharp increase in civilian casualties in recent months.

Bachelet said her office had received credible reports of serious violations in places that have been under Taliban control, including summary executions, restrictions of women’s rights, blocking girls from attending school and recruitment of child soldiers.

"Human rights violations undermine the legitimacy of the perpetrators, both vis-a-vis the people, and also with respect to regional and international institutions and other states," she warned.