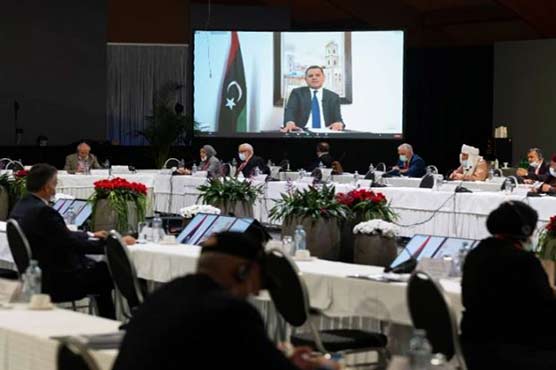 TRIPOLI (AFP) - Libya’s parliament meets Monday ahead of a vote on a new interim unity government for the divided country, a crucial step toward December elections and stability after a decade of violent turmoil.

Libya descended into chaos after dictator Moamer Kadhafi was toppled and killed in a 2011 NATO-backed uprising that has seen rival forces vying for power in the oil-rich North African country.

A UN-supervised process aims to unite the country after a ceasefire reached last October between two rival administrations, each backed by foreign forces, based in the east and west of the country.

The 188-strong House of Representatives was meeting in the coastal city of Sirte, the hometown of Kadhafi, located halfway between Tripoli, where the UN-recognised government is based, and the east, seat of a rival administration.

Prime minister-designate Abdul Hamid Dbeibah was elected in February at a UN-sponsored dialogue attended by a cross section of Libyans to steer the country toward the scheduled December 24 polls.

His interim government faces the daunting challenge of addressing the grievances of Libyans, from a dire economic crisis and soaring unemployment to crippling inflation and retched public services.

Dbeibah, a billionaire businessman, submitted his 33-member cabinet line-up to parliament for approval last week, without publicly revealing any names.

If approved, it would replace the Tripoli-based Government of National Accord (GNA) headed by Fayez al-Sarraj, and the eastern-based administration backed by strongman Khalifa Haftar.

If deputies fail to endorse the government on Monday, a new vote must take place, and Dbeibah has until March 19 to win approval for his cabinet.

But hurdles have emerged in the run-up to the vote, including allegations of vote-buying during the process to elect Dbeibah.

They centre on claims in a confidential report by UN experts that at least three participants were offered bribes of hundreds of thousands of dollars in November.

"Obstacles and difficulties have already emerged even before the vote of confidence," said professor of international relations Khaled el-Montasser.

There are "suspicions" surrounding the interim premier, added Montasser.

Libyan political analyst Mahmud Khalfallah said that Dbeibah’s "political rivals have launched ferocious campaigns to defame him by putting pressure on him".

"They have succeeded in creating a climate of tension," he added.

Libyans have also taken to social networks to decry the size of the proposed government.

Many have criticised Dbeibah’s decision to set up a cabinet with 33 ministers and two deputy premiers, saying a government due to rule just until December does not need to be so big.

The Sarraj government has only 26 portfolios.

Dbeibah has defended himself, saying he wanted to form a government that was "balanced" and "really representative of all the Libyan people" and major regions.

To reflect that, he said, seven key portfolios would be handed to figures from Libya’s three main provinces in the east, west and south.

The foreign ministry would be allocated to the east, the ministries of economy, trade and justice to the west, and the defence, interior and finance portfolios to the south.

Dbeibah has also defended the "integrity" of the process leading to his election and demanded the publication of the report claiming corruption.

The report prepared by UN experts is to be submitted formally to the UN Security Council in mid-March.

Some MPs have asked for the vote of confidence to be delayed until the report is published.