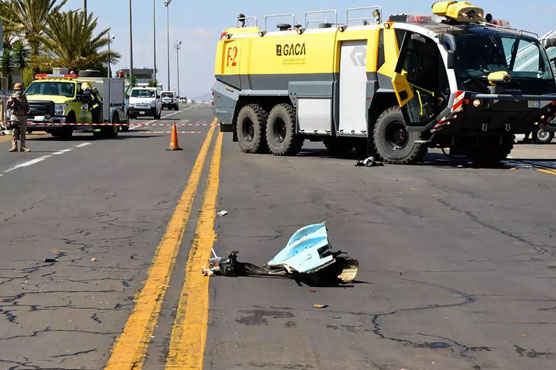 DUBAI (AFP) - Saudi forces intercepted an armed drone fired by Huthi rebels in Yemen on Thursday, the Riyadh-led coalition said, a day after a rebel strike on an airport in the kingdom.

The latest drone attack targeted the garrison town of Khamis Mushait in southern Saudi Arabia that hosts a key airbase but was destroyed before reaching its target, coalition spokesman Turki al-Maliki said, quoted by the kingdom’s official SPA agency.

Several drones attacked Abha’s international airport in the kingdom’s southwest on Wednesday prompting Washington to call for an end to Huthi aggression.

The coalition said the attack set a civilian aircraft ablaze, while the Huthis said they had struck Abha airport with four drones, claiming it was used to launch attacks inside Yemen.

The United Stated reacted by calling for the rebels to "immediately stop these aggressive acts", just days after demanding an end to any new offensive in Yemen.

US President Joe Biden, who has reversed his predecessor Donald Trump’s policy on the conflict, has deployed his new Yemen envoy to Saudi Arabia.

US Secretary of State Antony Blinken discussed the attack on Abha during a call with his Saudi opposite number Faisal bin Farhan Al-Saud, SPA reported.

Washington has ended its support for coalition military operations in Yemen and removed the Huthis from a list of designated "terrorist" organisations but reiterated its support for Riyadh in defending its territory.

In Yemen itself, the Huthis have resumed an offensive to seize the government’s last northern stronghold of Marib.

The battle has centred on a government military base west of the city of Marib, a pro-government commander at the scene told AFP.

"The camp was taken by the Huthis but they were dislodged by aerial raids" by the coalition which struck around 10 times, he said.

Losing the camp would sever an important supply line for government forces, he said.

Clashes at the base on Wednesday killed 23 insurgents and 15 pro-government forces, according to the commander.

Reinforcements to support government forces had arrived in the neighbouring province of Shabwa, he said.

The Huthis’ self-proclaimed foreign minister, Hisham Sharaf, said Tuesday that the rebels’ cross-border attacks were in response to coalition air raids in support of the government.

The war in Yemen has claimed tens of thousands of lives and displaced millions, according to international organisations, sparking what the UN calls the world’s worst humanitarian crisis.