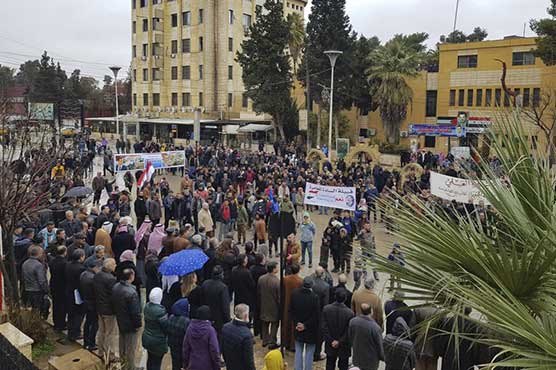 The state news agency SANA said the Kurdish forces opened fire at demonstrators protesting the siege on their neighborhood in Hassakeh city. The area is known as the security square and is controlled by government forces.

Separately, two car bombs went off two hours apart in the northwestern town of Azaz and another village some 50 kilometers (30 miles) away. The explosions in the areas controlled by Syrian opposition fighters allied with Turkey killed six civilians, including one child in Azaz, and six fighters at a checkpoint in a village near the town of al-Bab, first responders known as Syrian Civil Defense and opposition media reported.

Turkey and allied Syrian fighters control large parts of northern Syria, and are at odds with government forces and Kurdish-led forces, who are considered terrorists by Ankara. The opposition-controlled areas are scene of recurrent attacks that are rarely claimed by any one side. The Syrian Civil Defense said it responded to 11 explosions in northwestern Syria since the start of January, before Sunday, where at least 11 people were killed.

A video of the rally in the northeastern city of Hassakeh showed dozens of men gathering in a street on a rainy day as fire rang out over their heads. The men began chanting: “With our souls, our blood we sacrifice for you Bashar,” in reference to the Syrian President Bashar Assad.

A Kurdish-run news agency, Hawar, said security forces at a checkpoint in the city had come under fire, prompting its members to respond to the source of fire. The clashes led to the death of a government security member, the agency said.

The different accounts could not be immediately reconciled or independently verified in the city where both security forces have presence.

The Kurds, Syria’s largest ethnic minority, have carved out a semi-autonomous enclave in Syria’s north since the start of the civil war in 2011. In the area, they run their own affairs and control most of the country’s oil resources.

In both Hassakeh and Qamishli cities, they share control with government forces— which have presence in security zones, near the airport and in some neighborhoods. Both cities have a sizeable Kurdish population.

In Hassakeh, the Kurdish forces prevented flour from entering the government-controlled areas, forcing bakeries to shut down in the last week. Fuel and water have also been prevented from passing through checkpoints erected around the neighborhoods. Amid the tension, the two sides have conducted arrest campaigns against each other’s supporters and security members.

There was no immediate comment from the Kurdish forces. But Kurdish officials have previously said they were reacting to government troops which have imposed a siege and are harassing Kurdish-dominated neighborhoods in the northwestern Aleppo province where government is in control.

The Kurdish forces are backed by the U.S-led coalition, with which they fought Islamic State militants in Syria and ended their territorial control of large parts of the country in a military campaign that ended in 2019.

The U.S-led coalition still has forces in Kurdish-controlled areas in Syria, citing continued joint efforts to weed out the militants’ remnants. The presence of US troops is another reason for tension between the Kurdish and government forces.

Russia, which conducts patrols in northeastern Syria and is a main backer of the Syrian government, has offered to mediate between the Kurdish forces and the government.

The Britain-based Syrian Observatory for Human Rights said government forces have besieged Kurdish areas in northwestern Aleppo for month— preventing foods and medical supplies from entering. The Kurdish forces responded by imposing a siege in on government areas in the two cities for the last 21 days.

The Observatory said it is not clear if the person killed in the protest was a civilian or member of the government security forces.