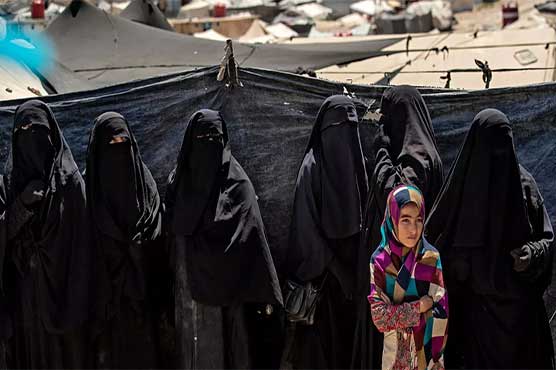 QAMISHLI (AFP) - Syrian Kurds have started to transfer the "least radical" foreign women and their children linked to the Islamic State group out of an overcrowded camp in northeast Syria to begin rehabilitation, an official said Tuesday.

So far 76 families have been moved since July from Al-Hol to the Roj camp at their request after showing remorse over their ties to the jihadist group, Kurdish official Sheikhmous Ahmed told AFP.

He did not give their nationalities, but Kurdish authorities say foreigners in Al-Hol hail from around 50 countries.

After years of spearheading the fight against IS with backing from a US-led international coalition, Syria s Kurds hold thousands of foreigners suspected of supporting the extremist group in their custody.

These include alleged fighters in jails, but also thousands more women and children related to them in displacement camps -- many in the sprawling tent city of Al-Hol.

Aid groups have repeatedly deplored living conditions in the camp where more than half of its 65,000 inhabitants are under the age of five, and Kurdish authorities reported the first coronavirus case among residents in late August.

"The Roj camp has been expanded in coordination with the United Nations... and the international coalition to transfer foreign IS children and women after they asked to leave Al-Hol," Ahmed said.

They are the "least radical" and "ready to be rehabilitated", he added. "They have asked to return to their countries and reintegrate into society, and have shown remorse."

He said 395 families were expected to be moved from Al-Hol to Roj in total, where they would live in their own individual tent and where the face veil worn by radical IS followers is not allowed.

Local officials have reported several incidents of IS followers attacking guards or aid workers in Al-Hol in recent months, or attempting to escape.

Western countries have been largely reluctant to repatriate their IS-linked nationals held in northeast Syria, though some have brought home women and children on a case-by-case basis.

IS jihadists declared a "caliphate" in large swathes of Syria and neighbouring Iraq in 2014, implementing their brutal interpretation of religion on millions under their rule.

But various campaigns against them in both countries whittled away at that proto-state, before Kurdish-led forces expelled them from their last patch of territory last year in Syria s far east.