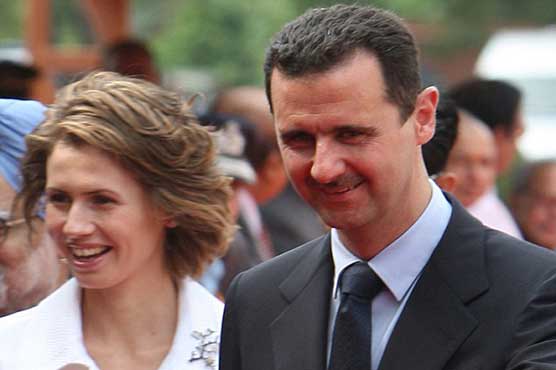 WASHINGTON (AFP) - The United States on Wednesday imposed sanctions on Syrian President Bashar al-Assad s wife and dozens of others as it vowed a vast pressure campaign under a new law that has already rattled the war-torn nation s economy.

The Caesar Act, which took effect Wednesday, punishes under US law any company that works with Assad, casting a cloud over efforts to rebuild Syria.

"We anticipate many more sanctions and we will not stop until Assad and his regime stop their needless, brutal war against the Syrian people," Secretary of State Mike Pompeo said in a statement, vowing a "sustained campaign of economic and political pressure."

The first batch of designations target 39 people or entities, including Assad personally as well as his wife Asma -- the first time she has been hit by US sanctions.

Under the law, any assets in the United States will be frozen. President Assad has been under US sanctions since he began to crush an uprising in 2011.

Born in Britain to a cardiologist father and diplomat mother, Asma al-Assad is a former investment banker who had styled herself as a progressive reformer and modern face of the Assads. She announced in August that she had recovered from breast cancer.

But Pompeo in his statement charged that Asma al-Assad, with the support of her husband and her own Akhras family, "has become one of Syria s most notorious war profiteers."

On Wednesday, the central bank devalued the country s pound after the currency depreciated for weeks on the black market in anticipation of the law.

Nonetheless, in its first batch of sanctions, the United States focused on Syrians and avoided targeting Russian companies -- a step that could send further chills through the economy.

The Treasury Department took action against companies involved in major property projects for post-war Syria including Marota City, a luxury residential complex, and Grand Town Tourist City, a development near the Damascus airport set to include an exclusive hotel and golf course.

"To make way for five-star real estate, the regime has evicted and razed the property of tens of thousands of residents from areas in Damascus that were until recently working-class neighborhoods sympathetic to the opposition," the Treasury Department said.

People and groups designated by the State Department include Mohammed Hamsho, one of Syria s most prominent business persons, and the Fatemiyoun, an Iranian-led division of Afghan Shiite Muslims that has been deployed to prop up Assad.

Assad, backed by Russia and Iran, has succeeded in winning back virtually all of Syria except the Idlib area after a war that has killed more than 380,000 people and saw the rise of the ultra-violent Islamic State movement.

The Caesar Act, passed by the US Congress last year with bipartisan support, aims to prevent Assad s normalization without accountability for human rights abuses.

It also blocks US reconstruction assistance. Humanitarian groups are exempt from the sanctions on working in Syria.

Pompeo said the goal was to force Assad into accepting Security Council Resolution 2254 of 2015 -- which called for a ceasefire, elections and political transition in Syria.

A UN-driven process has made no headway, with Assad last year launching a major offensive backed by Russian airpower to retake Idlib.

Pompeo said the United States was undertaking the pressure campaign "in full cooperation with other like-minded countries."

The European Union has imposed its own sanctions over Syria and a French court separately on Wednesday convicted an uncle of Bashar al-Assad over money-laundering and misappropriation of government funds.

The Caesar Act is named after a former Syrian military photographer who fled at great personal risk in 2014 with 55,000 images of brutality in Assad s jails.