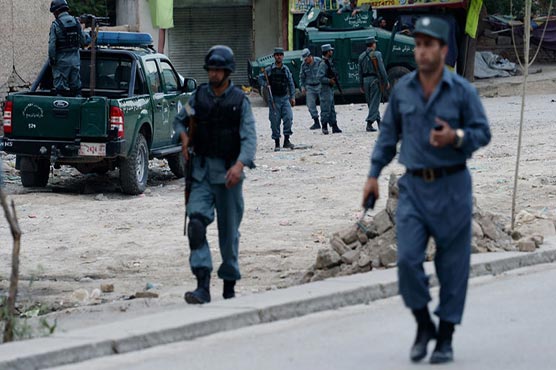 KABUL (AFP) - Gunmen stormed a Sikh-Hindu temple in central Kabul on Wednesday and were locked in an ongoing battle with security forces, an official said, in the latest assault on the Afghan capital.

The attack comes as Afghanistan is facing myriad crises including a raging insurgency, political deadlock, a massive cut in US aid, a flailing peace process and rising coronavirus cases.

"At around 7:45 am (0315 GMT), a number of attackers entered a Hindu-Sikh temple," interior ministry spokesman Tariq Arian told AFP.

"People are stuck inside the building and (security forces) are trying to rescue them."

The Taliban denied any involvement in the attack. While no other group immediately claimed responsibility, Islamic State militants frequently orchestrate assaults on the country’s religious minorities.

"There are about 150 people inside the temple. Families are living there and they usually gather to offer prayers in the mornings," said Anarkali Kaur Honaryar, a Sikh member of the Afghan parliament.

"Some people inside the temple are hiding and their phones are off. I am very concerned."

IS has a history of targeting Afghan Sikhs and Hindus including a suicide bombing in Jalalabad in July 2018 that killed 19 people and wounded 21.

Around 1,000 Sikhs and Hindus are estimated to reside in what is otherwise an overwhelmingly Muslim nation.

Earlier this month, IS militants killed 32 people and wounded dozens more in an attack at a political gathering in Kabul.

The decision came after US Secretary of State Mike Pompeo visited Kabul in a bid to resolve a standoff between President Ashraf Ghani and his rival Abdullah Abdullah, who also is proclaiming himself president following a contested election.

Pompeo, who lashed out at their "failure" to come to an agreement, said the US would immediately cut $1 billion and was "prepared" to pull another $1 billion in 2021, with further cuts possible after that.

The US and the Taliban signed a deal last month that was supposed to pave the way for talks between the Afghan leadership and the insurgents, but with Kabul unable to agree who is in government, the talks have stalled.

With a GDP of only about $20 billion, the cuts represent a devastating blow to Afghanistan’s donor-dependent economy.

Meanwhile, coronavirus is continuing to spread across Afghanistan. Officially there are 74 confirmed cases and two deaths, but many observers fear the number is far higher.

The impoverished country is testing few people, "social distancing" is an abstract concept for an illiterate population accustomed to crowding into mosques and large family gatherings, and thousands of people have returned from pilgrimages to coronavirus-hit Iran in recent weeks.