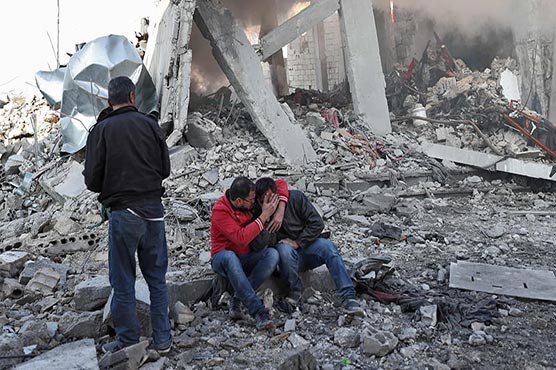 The early morning raids hit a populous village in Aleppo province where battles between Russia-backed regime forces and their opponents have raged for weeks, said the Syrian Observatory for Human Rights.

The victims include at least one child and a number of internally displaced Syrians, the Britain-based monitor said.

It follows a night of heavy bombardment by Russia and the regime that left at least 20 civilians dead in the neighbouring provinces of Idlib and Aleppo, according to the Observatory.

Since December, Syrian government forces backed by Moscow have pressed a blistering assault against the Idlib region in the country’s northwest and recaptured town after town.

The violence has killed more than 300 civilians and sent some 586,000 fleeing towards relative safety near the Turkish border.

Some three million people, half of them already displaced by Syria’s devastating war, live in the rebel bastion.

On Sunday raids by regime ally Russia left 14 people dead, including nine in the village of Kar Nuran in southwestern Aleppo province, the monitor said.

Syrian air raids with crude barrel bombs also killed four civilians in the Atareb district east of Aleppo, while another died in artillery fire near the city of Jisr Al-Shughur and one in Ketian village in southern Idlib.

Regime and Russian forces have intensified their attacks on Aleppo in recent days as government forces close in on a two-kilometre section of the M5 highway that remains outside of their control.

The key motorway connects Damascus to second city Aleppo and is economically vital to the government after nine-years of war.